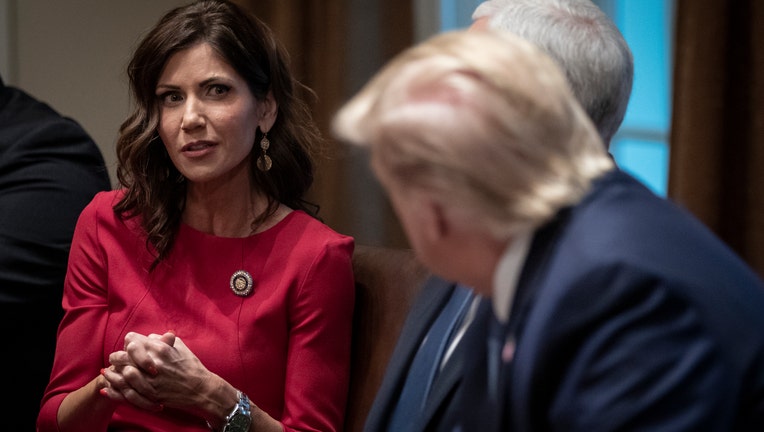 Governor of South Dakota Kristi Noem speaks as U.S. President Donald Trump listens during a meeting about the Governors Initiative on Regulatory Innovation in the Cabinet Room of the White House on December 16, 2019 in Washington, DC. (Photo by Drew (Drew Angerer / Getty Images)

(FOX 9) - As Minnesota reopens little by little, some surrounding states are opening at a faster pace.

Wisconsin, Iowa and South Dakota have all announced steps in the last day that will, in some cases, make big progress in reopening their businesses.

Neighboring states are reopening at a faster pace than Minnesota

Monday, Minnesota moved to reopen offices and industrial workplaces, but is not moving any further just yet. Meanwhile, things like state parks, salons, gyms and restaurants are opening back up in our neighboring states.

Wisconsin Gov. Tony Evers said the process of reopening needs to be “more like turning a dial than flipping a switch.”

As of right now, the dials of states that border Minnesota are turning at a slightly faster pace.

Effective Friday in Wisconsin, 34 state parks and forests will reopen with some restrictions. Evers also announced he will be loosening restrictions on non-essential businesses in an effort to turn the dial.

“Whether you’re an upholstery, taxidermist, a dog groomer or you rent recreational equipment like paddle boats, kayaks or canoes, you’ll be able to provide some of those services under our new order,” said Evers.

The new emergency order expands curbside business for non-essential business under loosened restrictions, provided the businesses have no contact with customers, complete payments online or over the phone and have operations performed by one staff member.

Iowa is taking another step toward reopening. Effective May 1, restaurants, fitness centers, retail stores and enclosed malls may reopen at 50 percent of operating capacity.

Those facilities are now able to reopen, but there will still be restrictions. For example, at restaurants, no more than 6 people can be in a group, tables must stay 6 feet apart, there is no bar seating and all customers and employees must be screened.

While officials in South Dakota never required businesses to shut down, Gov. Kristi Noem announced Tuesday it is time for their state to return to normal as long as they continue to practice social distancing and have a rigorous sanitation protocol to follow.”

As restrictions loosen, officials in all three states are still asking the public to be responsible as they work to flatten the curve.

South Dakota’s governor said the vulnerable populations in the hot spot counties of Minnehaha and Lincoln should still adhere to the stay-at-home order that is in effect until May 11.