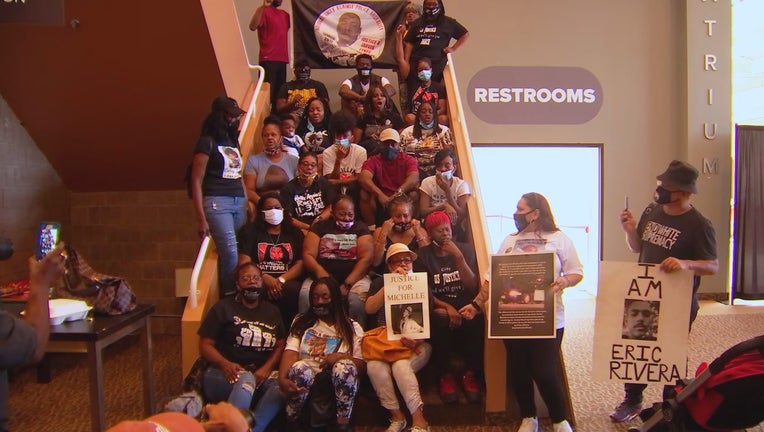 Mothers, family members, and partners who have lost loved ones in police altercations came together in the Twin Cities on Saturday as they continue the push for change.

They all came because of what happened in Minneapolis. The mothers say they were moved as they watched the video of Floyd struggling to breathe and calling out for his mother.

Family members who have lost loved ones in use of force incidents involving police continued their calls for justice on Saturday.

"When he [called for his mother], it hit the universe," said Dionne Smith Downs, whose son was shot in California. "To let him know that it is time for all mothers to get our step back."

"We make a way, us families make a way," added Ashley Quinones, whose husband was shot by police in Richfield. "That is for sure."

Quinones lost her husband Brian in September of 2019. After he was shot by police in Richfield. She said Saturday’s event was a way of promoting healing and change as all families look for justice.

"This is a group that nobody wants to be a part of, but it is so necessary that the families are in front of everything," said Quinones. "I've only been in this fight for 10 months hardcore because of my husband. But I have seen it firsthand and I am not going to allow it to continue on my behalf."

Though prosecutors would not file criminal charges against the officers who fired - because they say Brian Quinones threatened them with a knife - Ashley Quinones won’t give up her fight.

"What you all here need to understand," said Nicole Pettiford. "They can’t kill you until they kill your name. As long as we continue to keep our names out there, we will never die. We will live on regardless."

"This is what I've been trying to get together for two years," said Lisa Simpson. "This is about us. We're all family here, we're all here for the same reason."

The group plans to march Sunday from Dale Street and University Avenue in St. Paul to the Capitol. They say they are all demanding their cases be reopened.