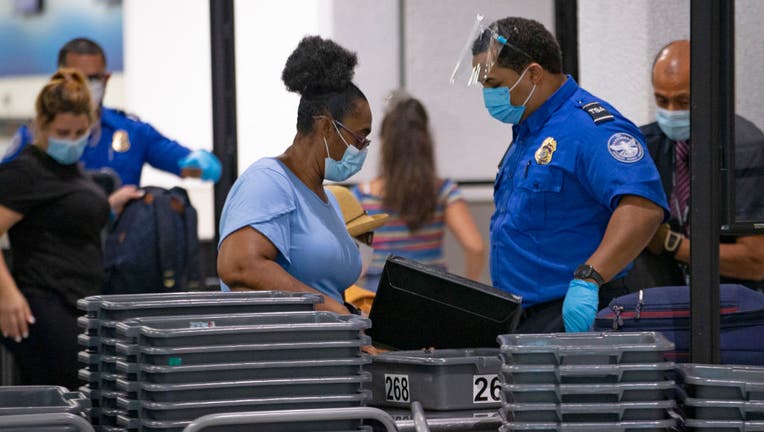 FILE - A TSA worker wears a mask while helping travelers get through a security checkpoint at the Miami International Airport on Nov. 22, 2020 in Miami, Florida. (David Santiago/Miami Herald/Tribune News Service via Getty Images)

MINNEAPOLIS (FOX 9) - The President’s new masking order took effect Tuesday for anyone flying or using mass transit, but in Minnesota, those rules have been in effect for some time.

For months now, MSP Airport and Metro Transit have required masks, but Tuesday it became a federal formality.

The President’s new masking order took effect Tuesday for anyone flying or using mass transit, but in Minnesota, those rules have been in effect for some time.

The Airports Commission required everyone at MSP Airport to wear a mask starting last spring, including the airlines. The airport has taken an educational approach to the masking rule, but the federal order closes the circle.

"What has really changed is that there is now a consistent federal regulation that is all across the country for all airports requiring people both in airports and on aircraft to wear masks," said Pat Hogan with the Metropolitan Airports Commission.

In other words, the federal order gives masking enforcement some teeth. The TSA says it is also taking an educational approach with the new order. There are no fines for now, but it may have a more powerful tool.

In a statement, TSA spokesperson Lorie Dankers said "passengers without a mask may be denied entry, boarding or continued transport."

Metro Transit also worked with riders to comply with their mask mandate, giving out more than 90,000 masks to keep riders safe.

"So, it’s going to be a long, slow process," said Hogan. "But, we hope that in the last half or certainly the fourth quarter of this year, that we’re going to see a lot more people on planes."

The new mandate requires a mask without slits or exhalation valves. Also, face shields by themselves are not an acceptable substitute for a mask.