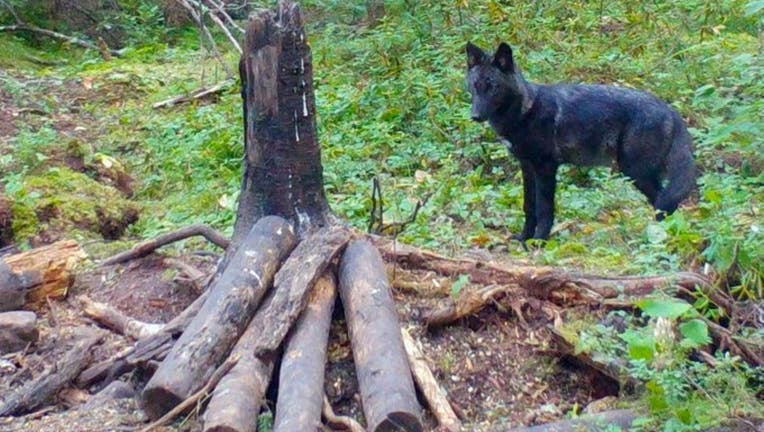 A wolf near a bear bait pile in northern Minnesota. (Voyageurs Wolf Project)

(FOX 9) - Wolves in northern Minnesota are known to take advantage of the bear bait left by bear hunters, making up a large portion of their diets this time of year.

That's according to a Twitter thread from the Voyageurs Wolf Project, which studies the summer ecology of wolves in the Greater Voyageurs Ecosystem in Minnesota.

Wolf researchers say most wolves this time of year fill their stomachs with free calories in the form of bait piles left by hunters. Bear-baiting starts in mid-August in Minnesota and continues through the bear hunting season that begins on Sept. 1. Hunters use various foods to create bait piles in the woods a few weeks before the season to get bears to frequent the area. 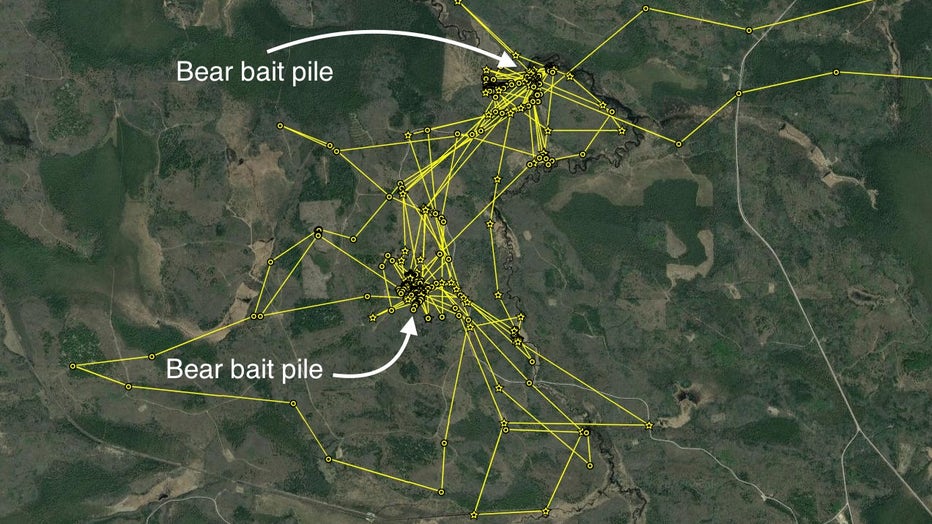 Wolf travels to get to bear bait piles in northern Minnesota.

Bear-baiting season corresponds with the leanest time of year for wolves. This time of year, the availability and vulnerability of wolves' main prey in deer and beavers is at a low. This is because deer and fawns have abundant food, so they're strong and often eating aquatic vegetation and not going on land - avoiding hungry wolves.

"As a result, killing prey at this time is challenging and energetically taxing for wolves. Despite this, many wolves still need to find an increasing amount of food to feed themselves and their ever-larger pups," Voyageurs Wolf Project explained on Twitter.

Wolves and their pups quickly respond to bait piles in the woods at this time of year. And they'll eat whatever is there, including candies, trial mix and stale pastries.

The Voyageurs Wolf Project says in 2016, one hunter used a lot of red Kool-Aid powder at a bait pile, which attracted a pack of wolves. Scientists know this because in the vicinity of the bait pile, they found "bright red soggy wolf scats," adding: "Clearly, the wolves were fans of Kool-Aid."

"Virtually every wolf we have studied to date, outside of those that live exclusively in Voyageurs National Park, has spent time feeding on bear bait piles at this time of year," Voyageurs Wolf Project says.

As the baiting season moves into bear hunting season, wolves will scavenge on piles of bear guts left behind by hunters and the remains of bears that were killed but not recovered by hunters.

"In a few instances, wolves will kill bears in September, but we suspect that most, if not all, of these instances are wolves killing bears that have been wounded from hunting," Voyageurs Wolf Project said.