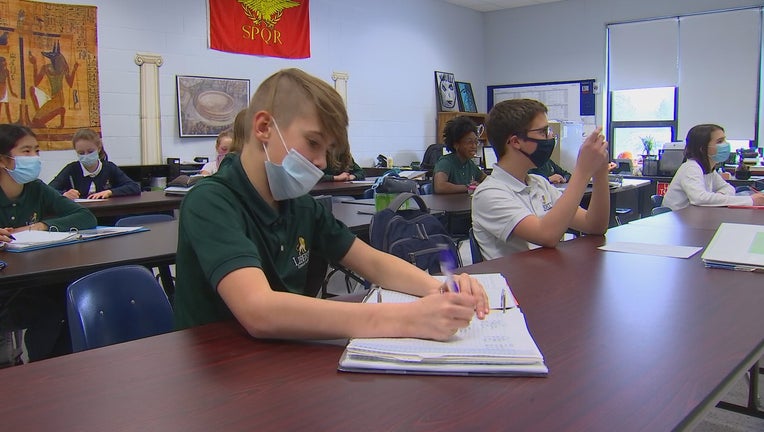 Students have been learning in-person the whole school year at Liberty Classical Academy in White Bear Lake, Minnesota amid the coronavirus pandemic.

WHITE BEAR LAKE, Minn. (FOX 9) - As public schools start returning to in-person learning, leaders at many private schools across Minnesota say they have been doing it safely all year.

At Liberty Classical Academy in White Bear Lake, there’s been one outbreak during the entire school year, which happened during the pandemic’s peak in November. Even then, officials say they couldn’t definitively link transmission to the school.

As public schools ponder returning to classrooms, a Twin Cities area private school has some knowledge to offer its peers.

"I can say right now, we have zero COVID cases in our school," said school Headmaster Rebekah Hagstrom. "We’ve implemented our plan and its gone very very well."

This week, the Centers for Disease Control said there’s little evidence that schools contribute to community spread of COVID-19. Health officials are now saying returning to the classroom is safe, if proper precautions are taken.

The Minnesota Independent School Forum estimates 95 percent of member schools have been in-person since the start of the academic year. The organization’s president, Tim Benz, said they’ve found COVID-19 precautions and protocols to be manageable and effective.

She says they are proof that schools can do in-person learning and do it safely.

"And I am in touch with other private school leaders and they’re saying the same thing that they’re not seeing this community-wide spread," said Hagstrom.

"They’re wearing masks inside school, but we don’t know what kind of behavior and involvement they have with other people outside of school and all of that is being brought in the classroom," said Brenda Bjorlin, a math teacher at Hopkins High School.

Bjorlin says she thinks all educators should be fully vaccinated before returning to the classroom. The Minneapolis and St. Paul teacher’s unions agree.

"The distance thing is working right now, so if we could wait until we had a vaccine—it would just feel a little bit safer," she said.

This year, Liberty Classical Academy experienced a nine percent increase in their student population as some public school parents looked for alternatives. Hagstrom remembers that first week back being a little nerve-wracking, but today she says it was worth it.

"I understand the fear," said Hagstrom. "The fear is real, but I think fear sometimes drives our decisions that doesn’t allow us to do what’s best for all."