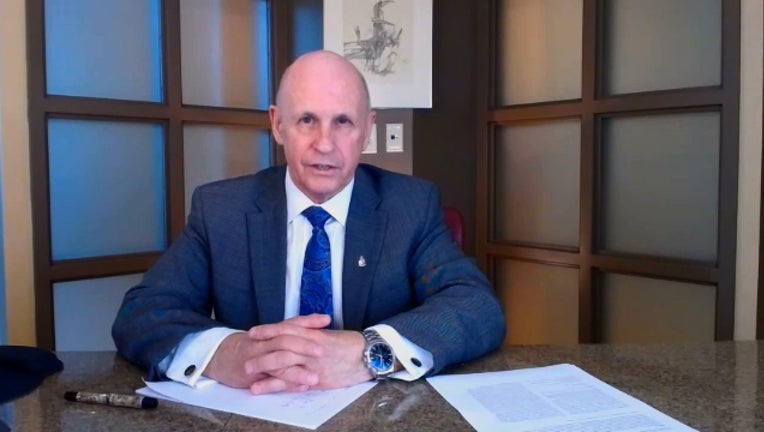 (FOX 9) - Bill Lewinski says we need to change the way cops are trained.

Bill Lewinski says we need to change the way cops are trained.

Lewinski runs the Force Science Institute in Mankato and has trained police officers in Minnesota and across the nation. His latest research studied three large police academies and found the 115 cadets often forget their skills training before they even left the academy.

“Complex skills, weapons take away, or some takedown skills, those were gone within two weeks from instruction,” said Lewinski.

Lewinski believes police training is too often conducted in “silos” and that communication and crisis intervention skills are not integrated or practiced enough in real-world scenarios.

“We are extremely deficient, not just in Minnesota, but across the nation, in the type of decision making we teach in the police world,” said Lewinski.

Police training standards vary across the nation, and Minnesota’s requirements are considered above average with 800 to 1,000 hours of skills training at an accredited program or academy. There is also a requirement for 16 hours of annual continuing education.

But other licensed professionals in Minnesota have more rigorous requirements.

A cosmetologist needs 1,550 hours of training, and must pass three separate exams. A  plumber needs a four year apprenticeship, and 7,000 hours of practical experience to become a journeyman. It can take two to three years at an accredited program to become a registered nurse, and you must pass a national exam.

Lewinski has spent nearly 40 years researching police tactics and training. His peer-reviewed research has appeared in professional journals in behavioral psychology, and he is frequently called upon as an expert witness in police use of force cases.

But, some in the law enforcement field question Lewinski’s research methods and his message.

“Some of it is useful and some of it is crap,” said Seth Stoughton, a former police officer and expert on the use of force.  “I don’t think there is a much better way to say that.”

Stoughton, who recently wrote a book on the use of force, said while there is a lack of empirical research in law enforcement, he believes the Force Science Institute cherrypicks data and uses sample sizes that are too small to justify its conclusions.

“Unfortunately, the thrust of their study seems to be developing information that can be used to explain officers’ bad decisions or poor actions,” said Stoughton.

He’s not the only critic.

A 2015 profile of Lewinski in The New York Times ran under the headline, “Training officers to shoot first, and he will answer questions later.” According to the Times, Lewinski has consulted and testified in more than 200 cases, most of the time defending police officers.

The FOX 9 Investigators interviewed Lewinski in 2004 about the police killing of Tycel Nelson in 1990, a case that Lewinski describes as a turning point in his career. The 17-year-old was shot in the back by Minneapolis Police officer Dan May, who said the teenager had pointed a gun at him.

Lewinski said his review of 900 police shootings showed bullet wounds to a suspects’ back are actually common, because suspects usually draw their weapons first, and often turn at the last moment. Lewinski’s said officers who hesitate to draw their weapons, even for a fraction of a second, could be making a fatal mistake.

Critics say that has been the dangerous premise behind much of his analysis: The cop who hesitates gets killed.

During the killing of George Floyd, former Minneapolis Police Officer Thomas Lane suggested allowing Floyd to sit up because he was concerned about excited delirium. Former Officer Derek Chauvin replied that’s why he is keeping Floyd in the prone position.

The theory of excited delirium may become a defense strategy at the officer's murder trial.

Lewinski has testified about inattentional blindness, or when an officer’s recollection of a shooting conflicts with video evidence. Lewinski blames it on the officer’s focus and memory, not lying.

Lewinski has also testified about 'slip and capture,' when an officer thinks they are reaching for their Taser, but grabs their gun and shoots a suspect.

Stoughton said it is impossible to test such a theory. It also does not justify a “hideously, unreasonable mistake."

The problem, according to Stoughton, is that juries and judges are often persuaded by what is claimed to be “scientific evidence.”

“But if you are trying to apply science-based research, it has to be based on the evidence and not stretched beyond what the data can support,” said Stoughton.

Lewinski said his analysis is objective and rooted in science.  “I’ve been called to testify on what the research has to say. There’s some people really upset by that,” said Lewinski.  “I have always tried to do the research that will help solve the dynamics because that’s the problem we need to solve.”