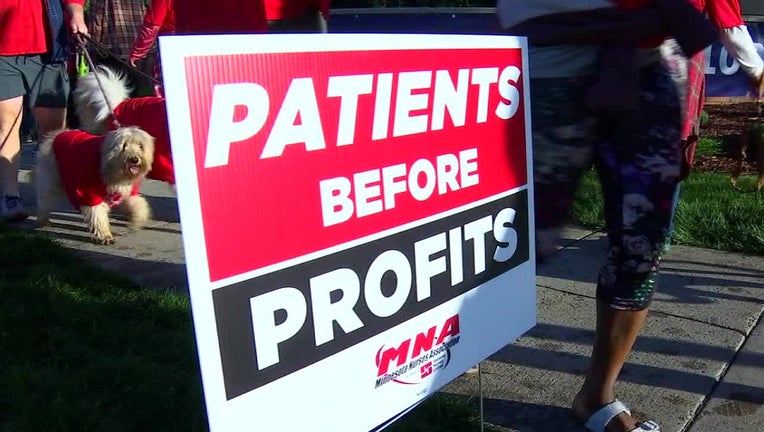 The Minnesota Nurses Association announced a date for a strike vote for new contracts.

(FOX 9) - The Minnesota Nurses Association announced Thursday they will hold a strike authorization vote with 15,000 nurses in the metro and Duluth after failing to reach an agreement for new contracts and putting "patients before profit."

Nurses are fighting for new contracts to "hold healthcare executives accountable" and force leaders to fix staffing and improve patient care. The Minnesota Nurses Association will hold a vote on August 15 on whether to approve the option of a strike. If passed, union leadership could call a strike at any time with a 10-day-notice to hospital employees.

"Nurses do not take this decision lightly, but we are determined to take a stand at the bargaining table, and on the sidewalk if necessary, to put patients before profits in our hospitals," said Mary C. Turner, RN at North Memorial Hospital and President of the Minnesota Nurses Association, in the press release.

"Corporate healthcare policies in our hospitals have left nurses understaffed and overworked, while patients are overcharged, local hospitals and services are closed, and executives take home million-dollar paychecks," said Chris Rubesch, RN at Essentia in Duluth and First Vice President of the Minnesota Nurses Association, in the press release.

"Nurses have one priority in our hospitals, to take care of our patients, and we are determined to fight for fair contracts so nurses can stay at the bedside to provide the quality care our patients deserve," Rubesch added.

If the vote passes and 15,000 nurses participate in a strike, it would be one of the largest nurses' strikes in United States history, the press release states.

In a statement to FOX 9, the Twin Cities Hospitals Group, comprised of Children's Minnesota, North Memorial, Fairview, and Methodist Hospitals, cited the pandemic for their staffing woes. They also criticized the union for moving to vote on a potential strike.

"While taking a strike authorization vote is the right of any union, we are disappointed that the nurses’ union leadership has rushed into their strike authorization vote and continues to reject our offer of an outside mediator. Mediation was successfully used in previous contract talks, and we believe it represents a practical way to bring focus and clarity to the negotiations. We encourage the nurses’ union and its supporters to focus on the pathways we’ve successfully used in the past," the statement reads.