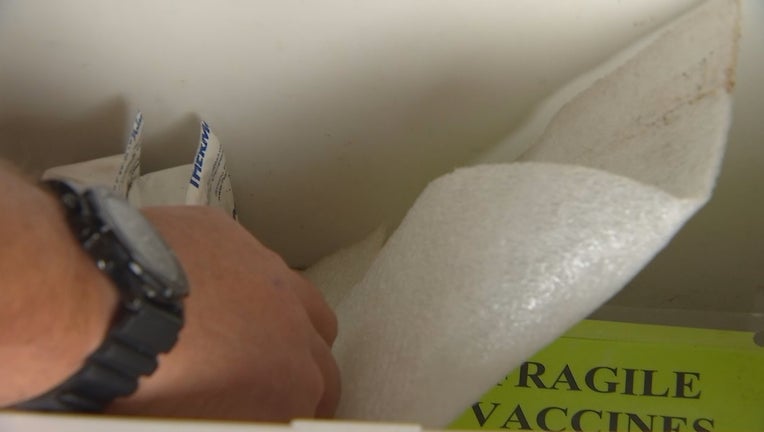 After buying a storage unit in Coon Rapids, Minnesota at an auction, a man found various medical supplies including personal medical information. (FOX 9)

COON RAPIDS, Minn. (FOX 9) - A man in Ham Lake, Minnesota made an unusual discovery of various medical supplies and personal medical information in a storage locker he bought last week.

Around the start of the pandemic, Tim Carter started shopping auctions for storage units as a hobby and for the excitement of the unknown.

A man in Ham Lake, Minnesota made an unusual discovery of various medical supplies and personal medical information in a storage locker he bought last week.

“It’s not like the TV show Storage Wars. For every nine units you buy, you may buy a tenth unit where you can recoup some money,” said Carter.

Last Tuesday, he purchased a unit in Coon Rapids. He was surprised to find a cooler mostly of old flu vaccines, a box of hypodermic needles - both unused and used.

“When we ran into this - you don’t know there’s hepatitis, there’s AIDS, there’s COVID, there’s all sorts of stuff out there,” said Jim Bellamy, Carter’s friend and fellow storage hunter.

“Then a I did a little more digging and came across these immunization forms, I guess is what they are,” said Carter. “Some of them are filled out. That’s when I contacted the organization and let them know what I had."

FOX 9 spoke to the owner of Homeland Health Specialist, the name of the company Carter found on various medical equipment in the storage unit. The owner said staff have been looking for these supplies for nearly a year. They gave this equipment to a nurse who worked for them for a single day and then was never heard from again.

“This is where we are at,” said Bellamy. “How do we get rid of it? You don’t want to just throw it in a dumpster and say, ‘Out of sight out of mind,’ so we are just trying to do the right thing and get rid of it right.”

After waiting more than a week for the items to be removed from his garage and no call back yet from the health department for guidance, Carter says the company made arrangements within an hour of FOX 9 calling and asking questions.

Carter originally inquired about a reward to help recoup the $177 he paid for unit, but since decided to refuse the money and is just thankful this medical mystery - at least for him - is over.

“I’m just trying to do the right thing,” said Carter.