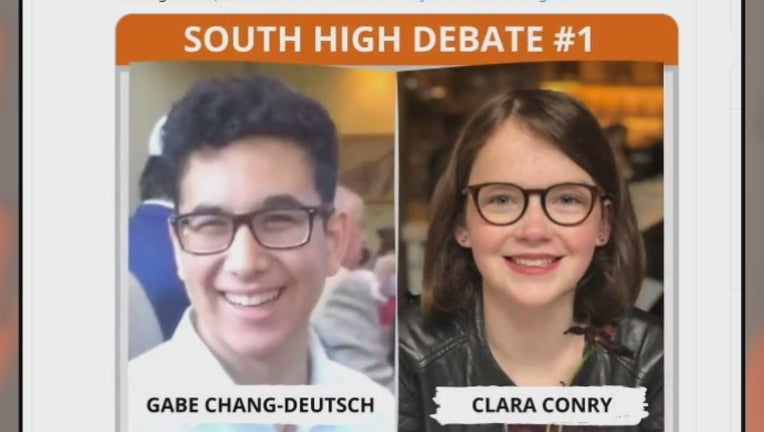 MINNEAPOLIS (FOX 9) - Two members of the Minneapolis South High School debate team are being recognized for their hard work.

South High School junior Clara Conry and senior Gabe Chang-Deutsch are back-to-back state champions and are now considered some of the best high school debaters in the nation.

Two members of the Minneapolis South High School debate team are being recognized for their hard work.

"I would say we spend up to 15 hours a week just preparing," said Chang-Deutsch.

In the latest Coaches Poll, the two emerged as the no. 1 nationally ranked high school debate team in the country.

"We put a lot of effort in this year, and it’s good to see it paying off," said Conry.

In their most recent debate, the team tackled the topic of criminal justice reform in America.

"What I find fun about debate is the argument, but it’s also like, you really get to research things that you wouldn’t learn about in school," said Chang-Deutsch.

The Minnesota Urban Debate League is a source of support. The organization was created in 2004 to boost interest in debate in urban schools.

It’s a partnership that has garnered these two back-to-back state championships.

"We’re competing against students many times from some of the most prestigious schools in the nation where it costs $40,000 a year to go to, being able to compete with them because of their support has been amazing," said Chang-Deutsch.

"It’s important for those people at smaller schools to know that even if they don’t have as much resources or as many coaches as bigger schools, there’s an ability to be successful and to engage in research if you want to," said Conry.

About 20 students make up the South High School debate team. A new Coaches Poll is released every month. Chang-Deutsch and Conry are working to hold onto their spot. They're preparing for the national championship coming up in April.