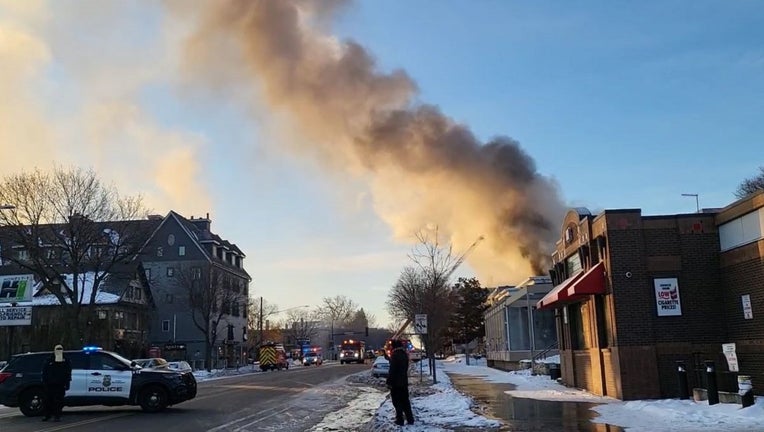 MINNEAPOLIS (FOX 9) - The president of a Minneapolis neighborhood association where a boarded-up four-story apartment building went up in flames on Saturday is urging the city to do more to address what they see as the underlying issues behind the fire.

The early morning blaze on Saturday in the city's Wedge neighborhood heavily damaged the building at 2312 Lyndale Ave. S — the fire spread to all floors, causing the roof to partially collapse and an exterior wall to fall into an alley, according to the Minneapolis Fire Department.

MFD said there were "several squatters inside the building," and one person jumped from the second-floor window and is in stable condition.

Jason Garcia is the board president of the Lowry Hill East Neighborhood Association (LHENA), which covers the area where the fire occurred. The association believes Saturday’s fire stems from several underlying issues, such as an absentee landlord who has neglected the property for years, the homelessness crisis in the city, and encampment sweeps during frigid weather.

City records show the property is owned by C. David George and was condemned on Oct.13. The city also condemned another apartment building George owns in Loring Park at 200 Oak Grove St. the next day, on Oct. 14.

Neighbors of both properties say they had ongoing issues with fires and people breaking in to seek shelter.

The attention she brought to the issue led to in-depth pieces focused on the Loring Park building reported on in the Southwest Voices and the Star Tribune.

For Garcia, the fire on Saturday is a sign the city needs to do more to address the risks posed by abandoned buildings.

"It's a tragedy that this happened in our neighborhood. It also happened in Loring Park. And there are other neighborhoods that this landlord owns properties in, and we don't want something worse to happen to somebody else who has a home next to one of these buildings," they said.

Mayor Jacob Frey and Ward 10 Council member Aisha Chughtai were not available for comment at the time of publication. Still, it would appear that having already condemned the building and fined George, the city has limited additional legal options. The Start Tribune reported in October that staff would try to meet with George to see if he was interested in selling the buildings.

Still, Garcia sees a connection between a recent encampment sweep near Lake Street and Saturday’s fire — as the sweep and recent cold temperatures mean more unsheltered people are seeking places to stay.

"I don't think that it's a coincidence that something like this happens on the coldest night of the year and after an encampment of unhoused people was removed on the other end of Lake Street. I think that all of these issues work together to create a crisis. And when you have people who own these buildings that aren't taking care of them and therefore taking housing off the market, it has further ramifications," Garcia said.

Bill Holmes is a social worker who lives in Loring Park near George’s abandoned apartment building at 200 Oak Grove St. He says neighbors complained to the city for over a year about unsafe and criminal activity happening at the building before the city took action and eventually condemned the property and boarded it up.

He said he wasn’t surprised to see another property George owns catch fire on Saturday, but he hopes it will change how people see the housing crisis.

"That now we'll see a pattern, that now people will wake up. That we can have a conversation about the inequality that's happening with the unhoused, about whose property matters," he told FOX 9. "Those who are unhoused and in encampments that are getting destroyed or the property of landowners who are not keeping up their property or who are really creating public hazards, public nuisances," he said.

Garcia said the fire also highlighted another issue: who the public or media see as responsible when there are fires in abandoned buildings.

"Both on social media and in traditional media, there has been a move to point at people who are unhoused and living in the worst circumstances and say that they're the ones responsible as opposed to people who have been or have the resources that could be housing people," Garcia said. "It points to the crisis that we're in and who has the power and resources to help address some of those things."