The City of Minneapolis says it has installed a new parklet at the intersection of 38th Street and Chicago Avenue South. Parklets are gathering spaces with seating built into the right-of-way, often next to the curb and an extension of the sidewalk, according to the city.

MINNEAPOLIS (FOX 9) - The City of Minneapolis says it has installed a new parklet at the intersection of 38th Street and Chicago Avenue South, the area also known as George Floyd Square.

Parklets are gathering spaces with seating built into the right-of-way, often next to the curb and an extension of the sidewalk. The seasonal spaces are designed to slow nearby traffic and to provide an area for seating, plantings, bike parking and public art, the city says. 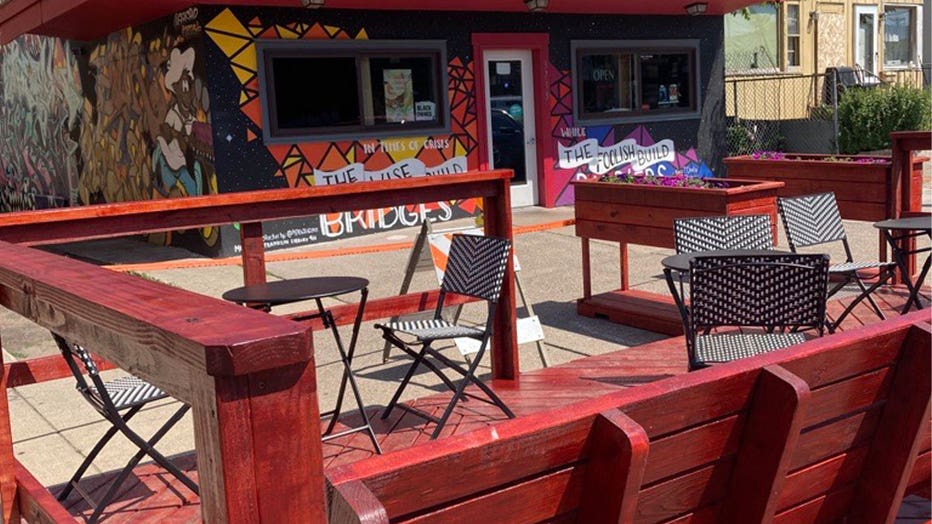 A Minneapolis parklet outside Smoke in the Pit and Just Turkey. (City of Minneapolis)

Thursday, the city announced four new parklets, including one outside Smoke in the Pit and Just Turkey at 38th and Chicago. Cedric Steele, the owner of Just Turkey, is part of a coalition of businesses that want the intersection to reopen in some capacity.

Earlier this month, city crews tried to remove barriers around 38th and Chicago to try and reopen the intersection to traffic. Both times, activists have re-installed barriers to keep the area closed. The intersection has been closed to traffic since the summer of 2020 after the murder of Floyd by Minneapolis police officer Derek Chauvin.

Earlier this month, activist Jaylani Hussein, the executive director of CAIR-Minnesota, said the reopening of the intersection is an effort to "delete history."

In a news conference at the beginning of June, Mayor Jacob Frey called George Floyd Square a "critical and known location of racial justice and healing perhaps 100 years in the making," and said the effort to reopen it was part of a "phased reconnection" to the square.

The city owns some parklets, businesses own some others and community organizations own the rest.