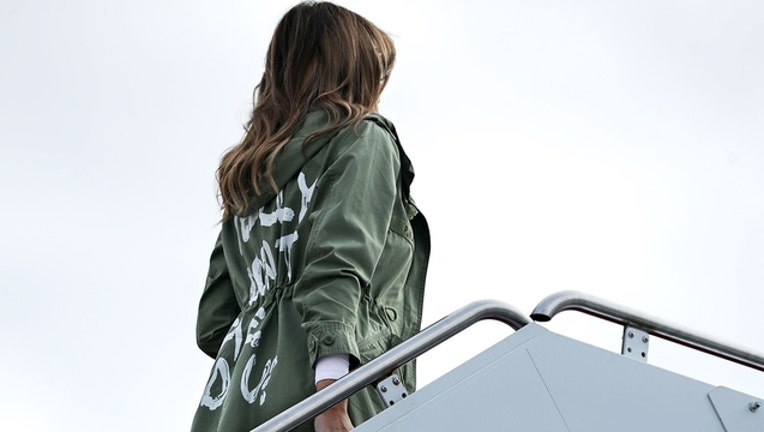 Melania Trump boards a plane before traveling to Texas to visit facilities that house and care for children taken from their parents at the U.S.-Mexico border June 21, 2018 at Joint Base Andrews, Maryland. (Photo by Chip Somodevilla/Getty Images)

WASHINGTON - Melania Trump is under fire for wearing a jacket that said “I really don’t care, do u (sic)?” while boarding a plane to visit migrant children being held at a Texas facility after they were separated from their families at the U.S.-Mexico border.

The first lady was seen in the green hooded spring military jacket while boarding a plane at Joint Base Andrews on her way to McAllen, Texas. The high in the District on Thursday, the first day of summer, was 86 degrees.

When asked what message the first lady's jacket intended to send, spokeswoman Stephanie Grisham said: "It's a jacket. There was no hidden message."

Trump wore a different pale yellow jacket when the plane landed in Texas.

He chimed in on Twitter Thursday evening about his wife's jacket saying, “I REALLY DON’T CARE, DO U?” written on the back of Melania’s jacket, refers to the Fake News Media. Melania has learned how dishonest they are, and she truly no longer cares!"