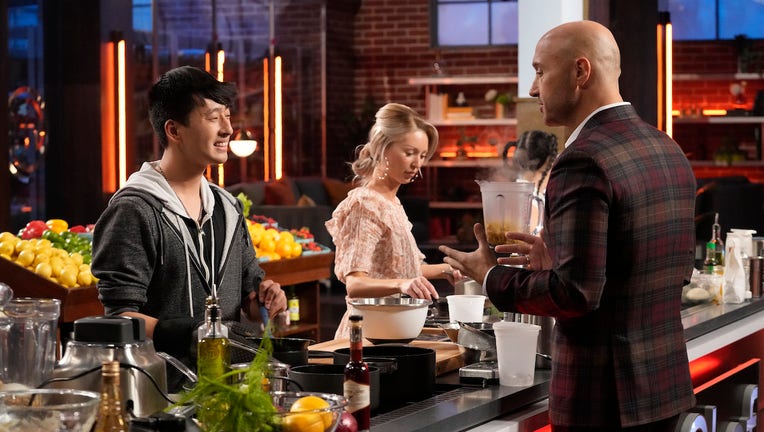 NEW YORK CITY - Welcome back to "MasterChef" recaps! In episode 3, "Back to Win - Audition Battles (continued)," the barrage of culinary fisticuffs continues, as more All-Star former contestants whip up "comeback dishes" to win a coveted white apron and a chance to return to the MasterChef competition. Miss a week? You can read our recaps and watch On Demand, on FOXNow, on Hulu and on Tubi, FOX’s free streaming service.

Season 12 of "MasterChef" finally zeroes in on the last of this season’s contestants, as Gordon Ramsay, Joe Bastianich and Aarón Sánchez supervise the last three rounds of audition battles. Which previous "MasterChef" contestants will make it into the competition proper for the rematch of their lives? Let’s find out!

WATCH FREE ON TUBI: Get stressed about risotto in Gordon Ramsay’s "Hell’s Kitchen"

"MasterChef" Back to Win, round 1: Great plates 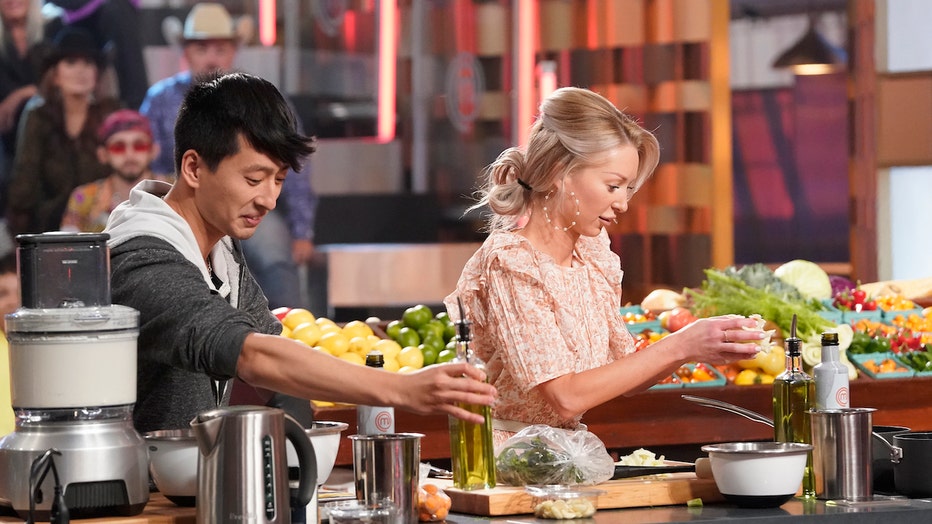 MASTERCHEF: Contestants in the season premiere of MASTERCHEF airing Wed. May 25 (8:00-9:00 PM ET/PT) on FOX

First up is a set of four chefs known in their previous seasons for being aces with precision plating; their flavors may not have been top-notch, but they sure know how to make food look like art. There’s season 3 alumnus Felix Fang, who wants to honor her Taiwanese-American heritage by cooking pork and cabbage dumplings; season 6’s Olivia, who decides to fight the accusation that her flavors can’t match her plating with a pistachio-crusted lamb; and season 10 competitors (now adorable besties) Bri and Fred, happily cooking alongside each other.

"Remember, you’re not a team, you’re competition," Joe warns them; still, they’re having a blast, and it’s cute.

On to the critiques: The judges like Felix’s dumplings, but note that the hand-rolled dumpling dough is just a bit too thick and undersalted. Bri’s sea bass with fennel puree and tomato water shows her usual finesse, even as Gordon complains that the puree isn’t smooth enough. Olivia’s Achilles heel returns, since her beautiful plate is disrupted by the fact that she didn’t season the lamb before crusting it.

But the star of the round is Fred, who wows the judges with a vegan, gluten-free, and dairy-free tofu dark chocolate mousse that Aaron calls "courageous" and Gordon calls "exceptional." Yes, he gets a white apron, and (after a quick fake-crying fakeout) so does Bri! The two BFFs get to go into the MasterChef competition properly, but we’ll see how long their friendship lasts in the heat of the kitchen.

WATCH FREE ON TUBI: "The French Chef with Julia Child"

"MasterChef" Back to Win, round 2: Climbing culinary hurdles 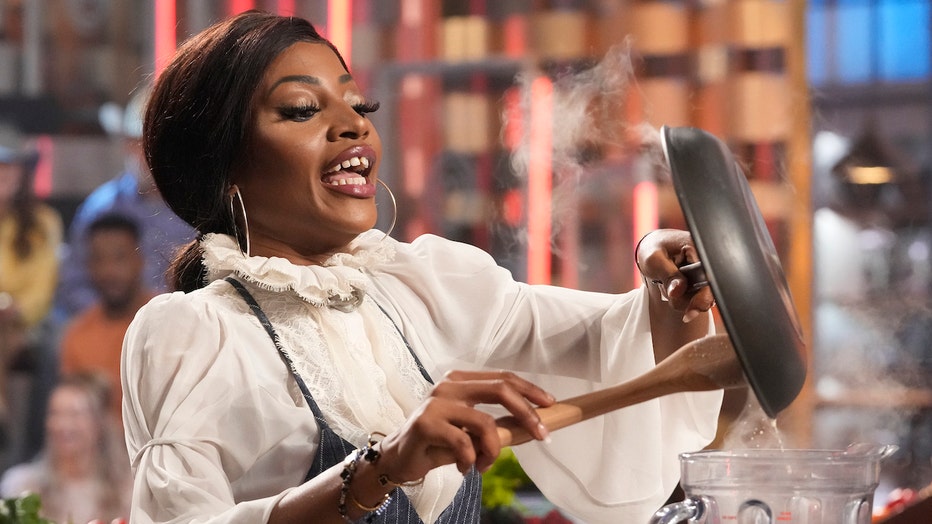 MASTERCHEF: Contestants in the season premiere of MASTERCHEF airing Wed. May 25 (8:00-9:00 PM ET/PT) on FOX

For the penultimate round of auditions, we get a group of chefs who had very specific personal roadblocks to overcome in their respective seasons. Season 9’s Samantha struggled under pressure (her youth didn’t help, either), season 11’s Alejandro had trouble editing himself and his dishes and season 10’s Keturah got easily flustered in the kitchen. Jaimee, a memorable contestant from season 5, lacked self-confidence — and that was on top of struggling with a muscle issue she’s since had diagnosed as spasmodic dysphonia.

Still, all four cooks come back with ambitious dishes meant to show how far they’ve come. Some work better than others; for instance, the judges have nothing but praise for Samantha’s simple but perfectly-executed egg yolk ravioli (a "MasterChef" staple); Gordon notes the dough is only "one notch [of the pasta roller] away from perfect pasta."

But Keturah’s dish is a cluttered nightmare of quote-unquote "fusion" ingredients — gummy seafood pasta with uni, caviar and pickled blackberries(?!), a dish as confusingly conceived as it is poorly cooked. (Gordon spits the food into a napkin, the first time he’s done it this season: "I don’t know if I need a chair or a sick bag," he laments.)

While Samantha’s got the first white apron, of course, the second one surprisingly goes to Alejandro — Gordon calls his coffee-rub elk tenderloin "boisterous," but notes that when you cook a big cut like that then slice it, you need to season the interior of the meat too. It’s a major note, which is what makes it so baffling that he gets the white apron over sweet Jamiee. After all, her pan-seared rainbow trout gets nearly unanimous praise from everyone except Joe (who offers the milquetoast hypothetical that the dish is "too everyday" for the "MasterChef kitchen".)

It’s clearly a surprise to a crestfallen Jaimee, and I don’t blame her; there were no substantive critiques to the dish, where Alejandro had major failings! "I hope we made the right decision," Joe frets in the judging room after the fact. I just wanted Jaimee to storm back in and pull a "Pretty Woman": "Big mistake, Joe. Huge."

"MasterChef" Back to Win, round 3: One last cook-off 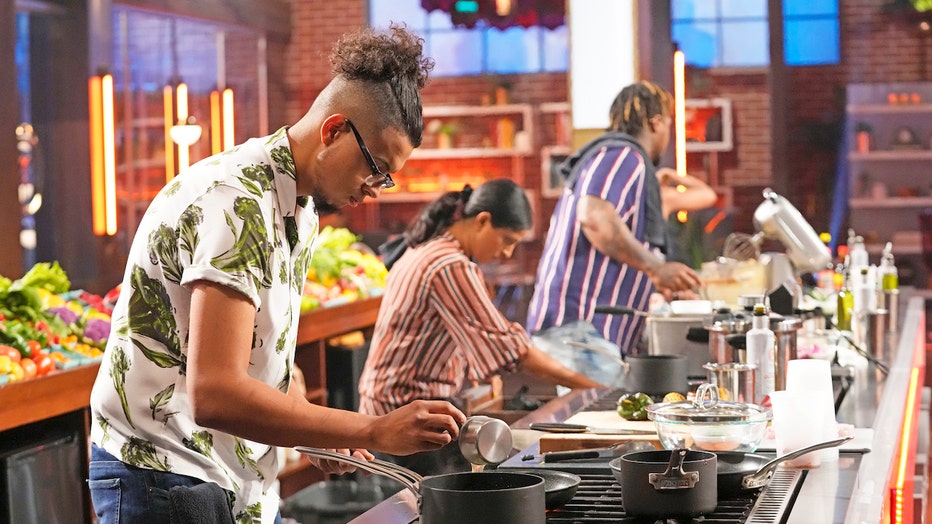 Now we’re at the final round. Season 6’s Shelly has made a name for herself since her time on the show, having built a thriving Jamaican street taco business in Brooklyn with her daughter. Gordon takes the time to congratulate her on all her success, which would leave this writer speechless. No such luxury for Shelly, though; she’s building her signature jerk chicken dinner taco for the judges.

Also in the mix is Gabriel from season 8, back from culinary school (which Gordon offered to pay for him to attend during Gabriel’s first elimination). Now he’s back and ready to rock with a kickin’ broccolini shirt and a thick port-wine-braised pork chop. There’s also dad-of-the-year Malcolm from season 4, cooking a bread pudding with whiskey caramel sauce that his daughter suggested, and season 1’s Sheetal, cooking a halibut tostada with just four ingredients she hopes to cook perfectly.

When it comes time for critiques, Gabriel quickly stands out — the 19-year-old home cook has become an accomplished chef. Joe notes that the secret to seasoning a thick cut of meat is to season it like a pretzel — aggressively on the outside to both form a crust and penetrate the interior. Luckily, he did that, and the judges are wowed. Malcolm’s bread pudding is "festive" and "a bear hug of a dish," according to the judges, while Sheetal’s halibut is slightly dry, though her other components are strong.

Shelly’s signature taco also gets some high marks, but Gordon thinks adding coconut rice on top of so many other components (black beans, plantains, slaw, sour cream, sauce) is just one thing too much. (If you’re in Brooklyn, I’m sure you can decide for yourself.) Still, when Aarón Sanchez says that you’ve made "a special taco," you know you’ve got it in the bag. Shelly and Gabriel get white aprons, and now we finally have our twenty "MasterChef" contestants.

Next time on "MasterChef": The competition finally begins, as the chefs are tasked with repurposing the dish that sent each of them home!

"MasterChef" airs Wednesdays on FOX. The first three episodes are also currently available to stream on Hulu. Recaps run weekly, and you can read them all below.

About the writer: Clint Worthington is a member of the Chicago Film Critics Association. He is the founder and editor-in-chief of The Spool, and a Senior Staff Writer at Consequence. You can find his other work at Vulture, Nerdist, RogerEbert.com and elsewhere.

Mary Berry’s Absolute Favorites (2014): "Great British Bake-Off" icon Mary Berry cooks up comfort food in her cozy kitchen, casually coaxing curious cooks into concocting Berry’s favorite recipes. (No, we will not apologize for any of that alliteration.) One season, eight episodes.

How to watch "MasterChef"

"MasterChef" airs Wednesdays at 8 p.m. CST on FOX. You can also watch On Demand or stream online via onFOXNow. All 12 seasons of the show, including the first three episodes of the current season, are streaming on Hulu. And there’s a whole world of "MasterChef" streaming free on Tubi, including beloved series "MasterChef Junior" and several international editions.