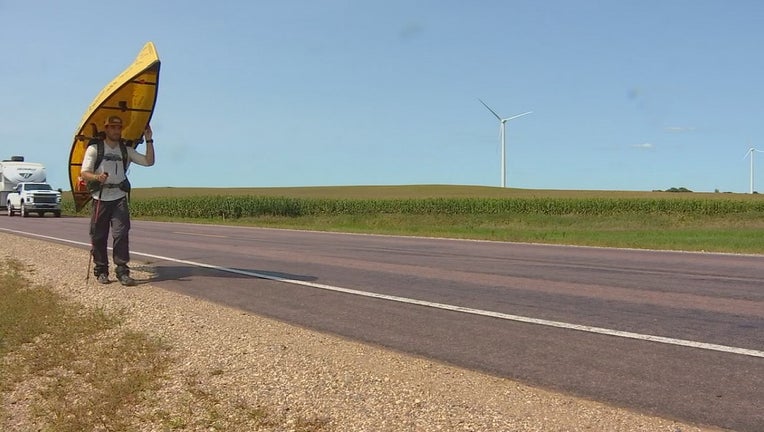 Evan Hansen took on the effort after suffering his own losses. (FOX 9)

(FOX 9) - A man hauling a canoe by foot across the state of Minnesota is on a mission to honor people who’ve lost their lives to suicide while raising money and awareness of mental health organizations.

"The idea behind the canoe is to bring something visible that’s invisible because mental illness is something you can’t see, smell, touch or feel," explained Evan Hansen. "You can’t feel the burden. You can’t see the burden."

A man hauling a canoe by foot across the state of Minnesota is on a mission to honor people who’ve lost their lives to suicide while raising money and awareness of mental health organizations.

Evan Hansen is on a mission.

"I’m out here walking for those who can’t walk with us anymore," said Evan.

With every step he takes, he's tackling the sensitive subject of mental health and suicide.

"There’s beauty everywhere," said Evan. "You just have to find it."

At the same time, he feels the weight of his 15-pound canoe on his shoulders across Minnesota.

"The more lives we touch with our mission, the more motivated I get," said Evan.

A couple of years ago, in a short period of time, Evan lost four people within his social circles to suicide. He wanted to honor their lives and help raise money to save others.

"The big message to boil it down, to tell people who are grieving the loss of a loved one, or contemplated suicide or attempted suicide is that you’re not alone, you’re not a burden," he explained.

An avid hiker and outdoorsman, the 26 year old is committed to portaging, carrying a canoe the full length of the Superior Hiking Trail. But just days before his launch date this month, wildfires threw him a curveball. With thousands of dollars of pledges lined up for his journey, he had to quickly come up with a new plan.

Instead, he and his canoe would trek across the southern third of the state, from the South Dakota border near Luverne all the way to Wisconsin, a total of 313 miles.

The goal is to raise $100,000 for the National Alliance of Mental Illness in his hometown of Rochester.

"I’ve dealt with thoughts of suicide myself," Evan explained. "So I can empathize that way. It’s something that touches everyone."

Evan and his canoe certainly stand out on the country roads along the I-90 corridor where the nearest body of water some days might be miles away.

So people ask what he is doing. When he tells them, he often is met with heavy hearts, tears, even prayers and then offers them the opportunity to write a name, a life lost to suicide, that he will carry with him.

So far, he's collected more than 200 names. Evan explained it can all be pretty overwhelming. "I didn’t expect to be walking down country roads for 300 miles and having almost everyone who pulls over, have a suicide story. So it’s really sobering and memorable in that way."

Evan is putting in anywhere between 8 to 12 miles a day. He expects his trek to take him another month or so. If you'd like to donate to his cause, you can click here for more information or to add a name in memoriam to his canoe. He is accepting those digitally in addition to those he collects out on the open road.