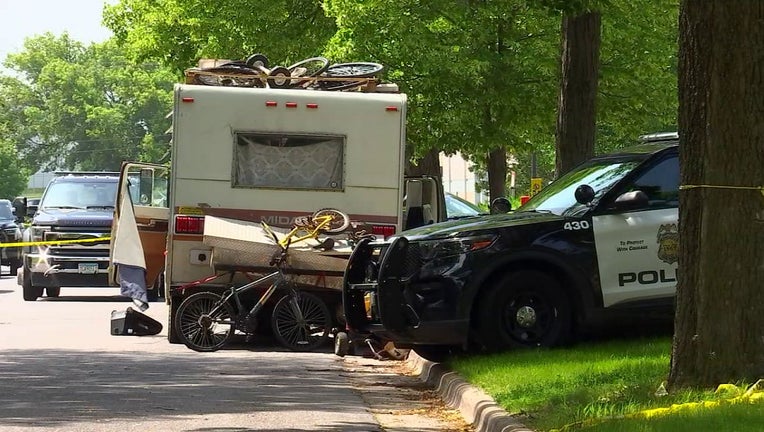 Police search the area around the RV on Girard Avenue in Minneapolis on Tuesday. (FOX 9)

MINNEAPOLIS (FOX 9) - Charges filed against the man wanted in a deadly recreational vehicle shooting in Minneapolis alleged the shooter had a previous violent encounter with the victim's husband days before the drive-by shooting.

Thirty-four-year-old Laundelle Jackson has been charged by warrant with murder for the deadly shooting on June 14 in Minneapolis' Near North neighborhood. Police responded shortly before 10 a.m. on that date for the report of an RV shot up on Girard Avenue North near Plymouth Avenue.

At the scene, police found 42-year-old Taleen Tanna who had been shot in the head and later pronounced dead. Police spoke with a man who said he was Tanna's boyfriend who identified Jackson as the shooter and gave an address on Irving Avenue where he lived.

Reviewing surveillance video, police spotted a white Impala with rear-end damage driving on Girard Avenue around the time of the shooting.

The complaint states that the victim's boyfriend and Jackson were apparently longtime acquaintances. Police also learned that Jackson had been involved in a violent encounter with the boyfriend about a week before that shooting.

A woman inside an RV parked in Minneapolis died after her camper was shot up Tuesday morning. Police responded shortly before 10 a.m. for reports of the shooting on Girard Avenue North near Plymouth Avenue in Minneapolis' Near North neighborhood.

Back on June 14, police were able to track down the white Impala believed to be involved in the shooting in a parking lot off Irving Avenue North near Plymouth Avenue. just two blocks from the shooting.

A building manager told officers he saw the vehicle pull into the parking lot and saw two men walk towards the same address that Tanna's boyfriend given to police. Officers spoke with a woman who police say knows Jackson who said he had discussed the previous fight with Tanna's boyfriend and discussed plans to kill Tanna's boyfriend. The woman also said Jackson was carrying a gun the morning of the shooting.

On July 6, police say they were able to speak with Jackson who refuted Tanna's boyfriend's claims but admitted he had been in the white Impala when the shooting happened. Jackson told officers he was in the backseat and another man had fired the shots.

It doesn't appear Jackson was arrested after that interview and now the warrant states his whereabouts are unknown. Jail records show Jackson was arrested in three separate incidents in the weeks before the shooting, including on assault charges presumably for the stabbing of Tanna's boyfriend on June 8. In that case, he was released after 36 hours with no charges filed.