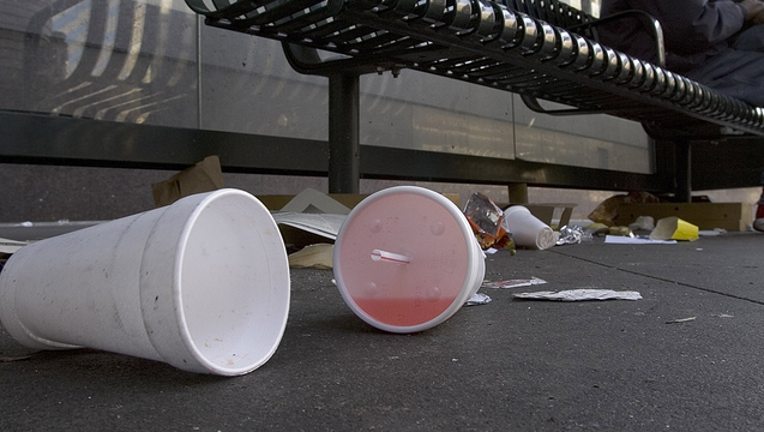 The Natural Resources Council of Maine said that Maine's the first state to enact such a ban. Similar legislation passed Maryland's legislature in April, but it's unclear whether that state's Republican governor, Larry Hogan, will sign it.

Oregon, Vermont and Connecticut are also considering banning such food containers statewide, and dozens of communities from Berkeley, California, to Seattle to Minneapolis to New York City have already passed their own bans, some of which date back to the late 1980s.

Environmental groups have sought bans amid rising public awareness of throwaway plastic that accumulates in the oceans without decomposing.

Companies such as Dunkin' and McDonald's have pledged to or have already eliminated foam cups, while communities around the globe are also considering bans of their own. In December, European Union officials agreed to ban some single-use plastics, such as polystyrene food and beverage containers, in an effort to curb marine pollution.

"With the threats posed by plastic pollution becoming more apparent, costly, and even deadly to wildlife, we need to be doing everything possible to limit our use and better manage our single-use plastics - starting with eliminating the use of unnecessary forms like plastic foam," said Sarah Lakeman, Sustainable Maine director at the Natural Resources Council of Maine.

Mills called it an "important step forward in protecting our environment." The governor said it creates consistency for businesses while providing time to adjust.

The law will prohibit "covered establishments" like restaurants and grocery stores from using polystyrene containers. Hospitals, seafood shippers and state-funded meals-on-wheels programs will be exempt.

Maine had banned foam food containers at state facilities and functions since 1993 . Some communities in the state had already banned polystyrene.

The legislation faced strong opposition from the plastic industry, food service container manufacturers and Maine business and tourism groups, which argued polystyrene is economical and a better way to keep food from spoiling.

Such industry groups asserted that the bill doesn't mean consumers will stop littering. The groups said they're taking voluntary steps to make plastic package reusable, recyclable or recoverable by 2030. The plastic industry in January committed to spending $1.5 billion over five years to end plastic waste through a new nonprofit, The Alliance to End Plastic Waste, according to American Chemistry Council lobbyist Margaret Gorman.

"All packaging leaves an environmental footprint regardless of the material type," Gorman told Maine lawmakers in written testimony.

Maine State Chamber of Commerce lobbyist Ben Gilman said the bill would raise costs for small businesses in particular while sending a "chilling message" to companies in the state that manufacture food service containers.

"These types of issues are better dealt with on a regional or national basis due to unbalanced cost impact it will have on Maine businesses," he said in written testimony to lawmakers.