YOSEMITE NATIONAL PARK, Calif. - Yosemite National Park’s "firefall’ phenomenon draws thousands of giddy photographers and adventure seekers, and those who caught the main event this year were treated to what looked like a massive stream of lava flowing down El Capitan’s granite face.

In mid-February, when Horsetail Fall is flowing, the sun is positioned right and the sky is clear, light entering Yosemite Valley at sunset refracts off the 1,500-foot waterfall, creating a fiery-orange flow.

The natural event requires a series of elements to align perfectly, highlighting how special it is to witness.

"It’s just amazing, the magic of mother nature. I had goosebumps and this was my second time seeing it," said Los Angeles-based photographer Niaz Uddin.

His 2021 firefall experience culminated after two days of scouting the perfect location amid undesirable weather. Generally, the prime window is from Feb. 10-20, though it shifts a bit each year, according to park officials. 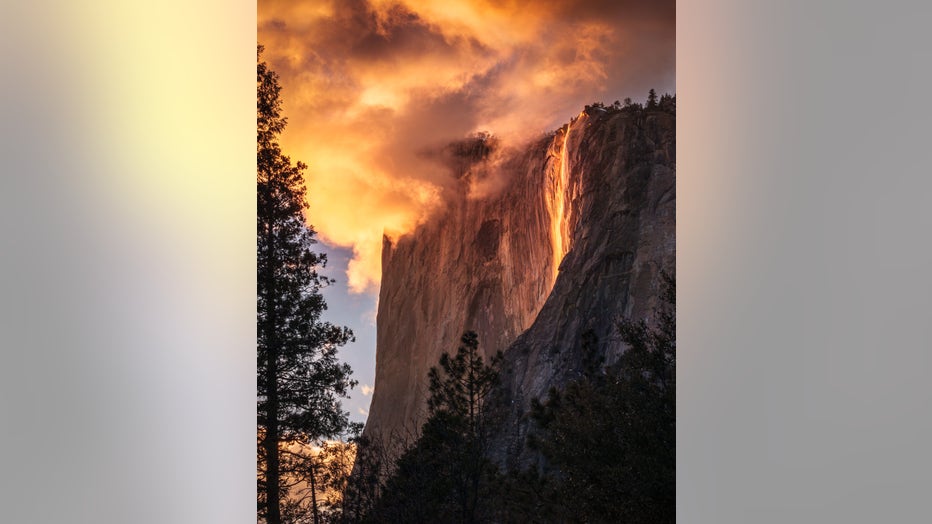 Horsetail Fall, while enormously tall, doesn’t have a strong flow most of the year. There’s no creek or river feeding it. If it doesn’t snow or rain in the weeks before the window, you can’t see the glow. Also, if clouds roll in at the last second and block the sun, there’s no firefall.

This year, to help ensure the safest experience during the pandemic, Yosemite launched a day-use reservation system for February. Overall, the majority of park-goers who showed up for the event followed recommended safety measures, such as wearing a mask and keeping their distance from other people, officials said.

Yosemite designated Feb. 12-24 as the best window to view the firefall for 2021. And though the drama fizzles out in the latter dates, officials said it’s still possible to see as late as Thursday.

"Horsetail Fall is a unique natural phenomenon that attracts people from all over the world to Yosemite National Park," park officials said in a statement. "It is a spectacular sight to see."

MORE: Full ‘Snow Moon’ will appear in night sky this week: When and how to see it

Historically, thousands of people flock to the Yosemite Valley each day during prime viewing dates. No official numbers were provided this year, though Uddin estimates 1,000 people were lined up with him on Feb. 16, which officials said was one of the best viewing days this year.

If you’re hoping to catch the tail end of the firefall, be sure to first make a reservation and then adequately prepare yourself. Main parking is along Northside Drive, a pedestrian walkway has been established in the right-hand lane. Be prepared to walk at least one mile in each direction, bring layers, enough water and a flashlight or headlamp.

Keep an eye on the weather and enjoy the hunt — it’s part of what park officials said gives the event a sense of community. According to Uddin, you may be treated to more than you anticipated.

"Even if you’re not a photographer and your goal is to just enjoy, it could be life-changing," he said. "It is worth your time and effort. It’s such an amazing ceremony. It looks like fire falling from the sky, ‘Can you believe that?’"