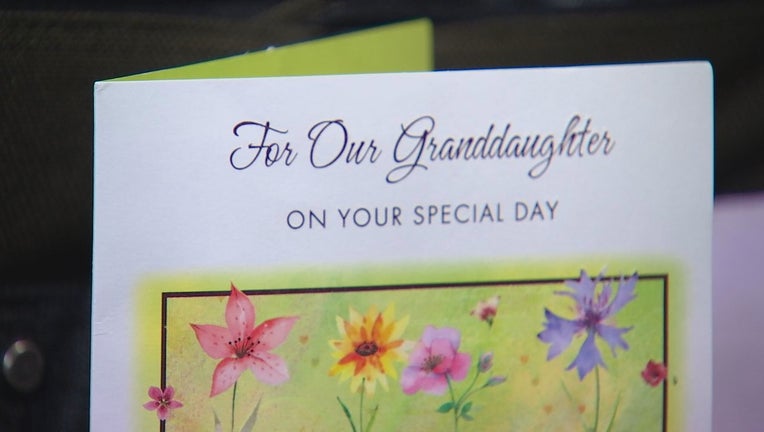 A Minnesota family found a long lost birthday card from their grandfather, who passed away last fall, that was meant to be delivered seven years ago.

A long lost birthday card became a special surprise to a woman who lost her grandfather last fall.

Mary didn't think anything of grabbing her father-in-law's old suitcase when she decided to tag along with her husband on a business trip from Wausau, Wisconsin to Delano, Minnesota. After noticing a strange looking silhouette in the lining, she discovered a birthday card Gary Kowatch had sent to her daughter. The letter was sent seven years ago, but it had been returned to sender because his granddaughter had moved.

"He probably just stuffed it into his suitcase and thought I'll give it to her when I see her next. He probably forgot about it," said Mary Kowatch.

Inside the card was $10, which grandpa sent to all his grandkids. However, what made this delayed delivery so special is Gary passed away from liver cancer last October. Mary also found the card seven years to the day after it was postmarked -- just two days before her daughter's birthday.

"I thought this is one more way grandpa is reaching out to his granddaughter, saying, 'I love you and happy birthday,'" said Kowatch.

Abby Pempek says she has many fond memories of her grandfather, like the trip they took to Israel with her sister a decade ago. Though, getting one last birthday wish from him from heaven is one she will never forget.

"It was really cool to just get that," said Pempek. "When he passed, it was short notice and quick. It was a nice little reminder that I could get. A nice memory I could keep of him."

Kowatch hand delivered the card to Abby on her way back to Wausau and she says it was the best birthday present Abby could get.

"Grandpa is still just giving," said Kowatch. "Even though he's passed away. It's just a sweet, sweet memory."