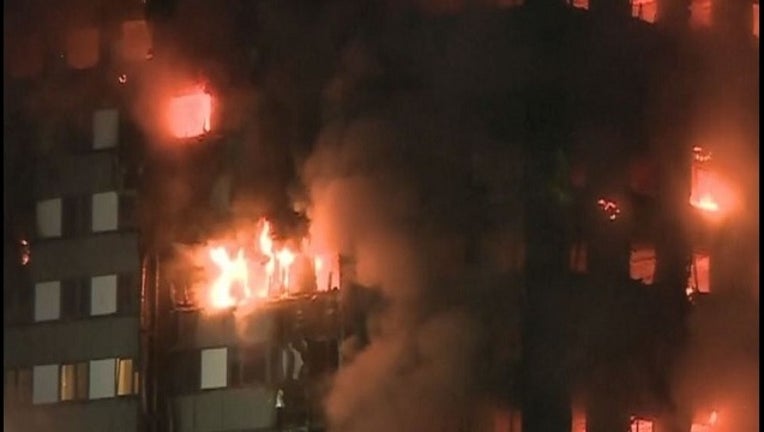 LONDON (AP) -- Fifty-eight people who were in Grenfell Tower are still missing and are presumed to be dead, London police announced Saturday, raising the death toll in the horrific inferno that turned the public housing block into a charred hulk.

Public anger is mounting as residents and neighbors demand answers for how the blaze early Wednesday spread so quickly and trapped so many of the tower's 600-odd residents. British media have reported that contractors installed a cheaper, less flame-resistant type of exterior paneling on the 24-story tower in a renovation that was completed just last year.

Police Commander Stuart Cundy said the number of 58, which was based on reports from the public, may rise and includes the 30 deaths that have already been confirmed. He says it will take weeks or longer to recover and identify all the dead at the charred building.

"Sadly, at this time there are 58 people who we have been told were in the Grenfell Tower on the night that are missing, and therefore sadly, I have to assume that they are dead," he said.

Cundy said there may have been other people in the tower that police are not aware of, which would add to the final death toll. He asked anyone who was in the tower and survived to contact police immediately.

Police say the harrowing search for remains had been paused Friday because of safety concerns at the blacked tower but has resumed. Cundy said emergency workers have now reached the top of the tower.

Cundy said police will investigate the tower's refurbishment project, which experts believe may have left the building more vulnerable to a catastrophic blaze.

British Prime Minister Theresa May, facing criticism for the government's handling of the disaster, met Saturday with a small group of fire survivors invited to her official residence at 10 Downing Street. The meeting is unlikely to quell complaints that May has been slow to reach out to victims, despite her announcement of a $6.4 million emergency fund to help the displaced families.

The identification of the victims is proving very difficult -- which experts attribute to the extreme heat of the fire. British health authorities say that 19 fire survivors are still being treated at London hospitals, and 10 of them remain in critical condition.

A solemn Queen Elizabeth II marked a minute of silence for victims of the London high-rise inferno at the start of a procession Saturday to mark her official birthday. She said Britain remains "resolute in the face of adversity" after the horrendous fire and recent extremist attacks in London and Manchester.

The 91-year-old monarch said it is "difficult to escape a very somber mood" on what is normally a day of celebration.

The queen and her husband, Prince Philip, stood silently on the steps of Buckingham Palace before the start of the Trooping the Color ceremony that each year marks the queen's official birthday, which is traditionally celebrated in June when the weather is warm.

There is simmering anger in the multi-ethnic north Kensington area hit by the blaze, and public fury has been directed at senior government figures, including May, who was jeered Friday after she visited the fire community. Hundreds have been left homeless by the blaze, putting more pressure on officials in a city plagued by a chronic housing shortage.

Scuffles broke out near the Kensington and Chelsea town hall offices Friday as demonstrators chanting "We want justice!" surged toward the doors.

The government has promised a full public inquiry, but that has done little to a sense of frustration at the lack of information about how the fire moved so quickly to engulf the building.

Engineering experts and fire safety specialists believe the building's exterior cladding may have quickly fueled the blaze, overwhelming fire protection devices. British officials have ordered a review of other buildings that have had similar renovations.

The tragedy has provoked a huge response from nearby communities. More than 3 million pounds ($3.8 million) have been raised for the victims. Many of the displaced are living in churches and community centers. There is ample food and water, but very little privacy or proper bedding, and with the tower destroyed, no one knows where they will be relocated or for how long.

Two nearby Underground lines were partially shut down Saturday in the fire area to make sure that debris did not land on the tracks.

Some Grenfell residents had warned months ago fire safety issues at the tower meant that it was at risk of a "catastrophic" event. They say their complaints were ignored -- and fear it was because the tower was full of poor people in a hugely wealthy neighborhood.