The International Motor Contest Association Old Timers showcases roughly 100 pieces of memorabilia in an exhibit at the Dakota County Fair every year.

FARMINGTON, Minn. (FOX 9) - Next to the antique tractors and vintage gas station at the Dakota County Fair, there is a shrine to days gone by.

Gregg Anderson's dad, Glen, used to race sprint cars around the upper Midwest. The two of them restored one of Glen's race cars – which is now on display at the fair -- before he died a few years ago.

"It brings back memories and it's cool that people still remember him. There's still a few around," said Gregg.

The car is one of roughly 100 pieces of memorabilia in an exhibit put on by the International Motor Contest Association Old Timers every year.

The group is made up of former drivers, crew members, and racing fans and their goal is to keep the names and tales of local race car drivers alive. 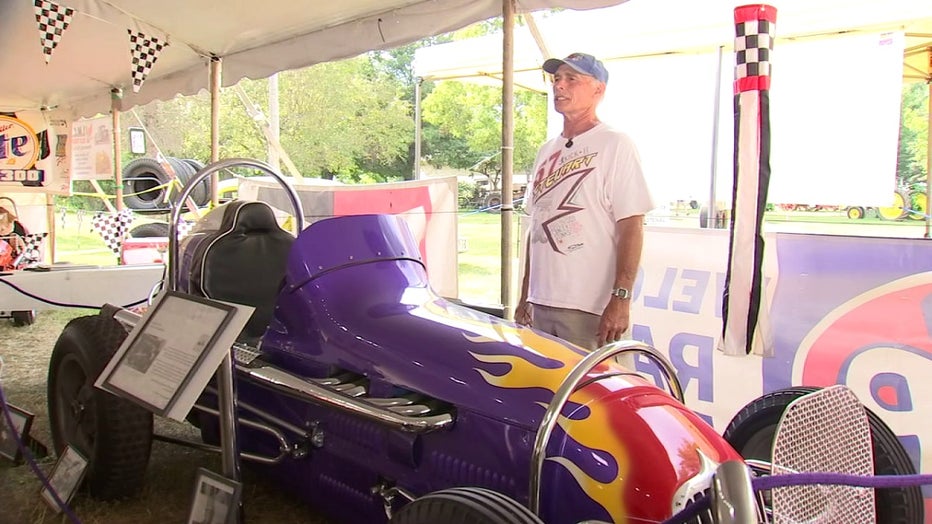 "The reason we want to preserve it is that when these older drivers, when they pass on, a lot of those stories are going to be lost. We are trying to preserve those stories, their stories of what it was like to race back in the day," said IMCA member Kevin Busse.

Most of the photographs of race tracks that are long gone like the State Fair Speedway, Raceway Park in Shakopee and the Rex Speedway in Inver Grove Heights, and helmets and fire suits from legends like A.J, Foyt, come from driver's homes and personal collections.

But the IMCA Old Timers want to build a small facility at the fairgrounds to permanently house the display.

"They come in and look at the pictures and ask questions or look at the State Fair photographs and say 'I was there at that race. I saw that happen'," said Busse.

Anderson says sharing a piece of his father with the rest of the world is a good way to honor his memory.

"It's just good to talk to people and have some of this alive for a while here," said Anderson.