A timelapse taken from the summit of Oregon’s Black Crater volcano captured the Perseids meteor shower on August 7.

The Leonid meteor shower occurs each year in November and peaks toward the middle of the month. The Leonids are bright meteors, can also be colorful, and are considered to be some of the fastest meteors out there, according to NASA.

They’re also known for periodic storms every 33 years or so, which can result in hundreds to thousands of meteors seen per hour on Earth — depending on the location of the viewer.

No storm is predicted for 2021, but stargazers can still see plenty of meteors during the activity period of Nov. 6-10. The shower will peak early in the morning on Nov. 17, according to EarthSky, which offers night sky and science news.

Leonids are also known for their fireballs, which are larger explosions of light and color that can persist longer than an average meteor streak, as well as "earthgrazers," which are meteors that streak close to the horizon and are known for their long and colorful tails, NASA says. 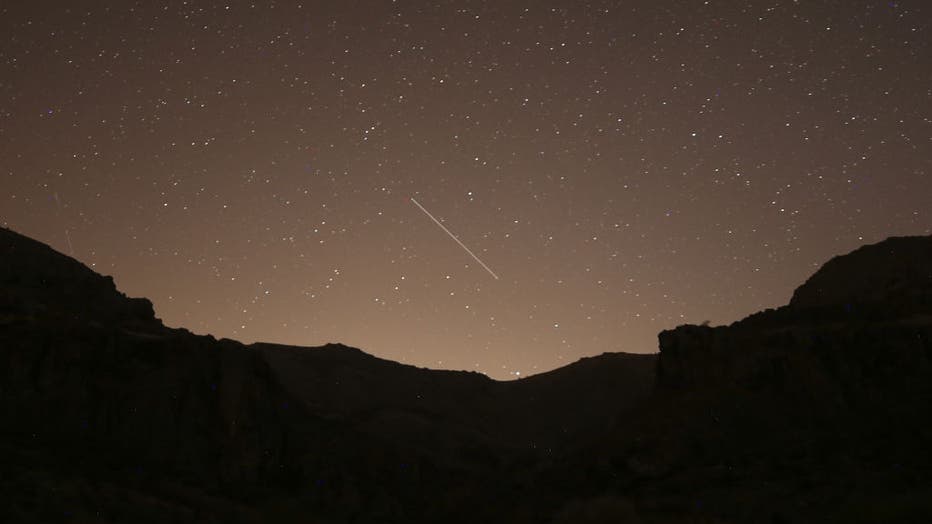 FILE - Leonids meteor streaks across the sky over Gudul district of Ankara, Turkey on Nov. 17, 2020. (Photo by Dogukan Keskinkilic/Anadolu Agency via Getty Images)

How many Leonid meteors will be visible in 2021?

Skywatchers can expect to see anywhere from 10 to 15 meteors an hour at the peak of the Leonid meteor shower, according to EarthSky. And that is under ideal conditions, which includes a rural location and a moon that’s absent in the sky.

"In 2021, we have to deal with a waxing gibbous moon, which will make it hard to see fainter meteors. The best time to look is just before dawn (on Nov. 17) after the moon has set," the website states.

The Leonids are best viewed starting at about midnight local time and in an area away from city or street lights — preferably in the country or other rural setting, NASA says.

"Come prepared for winter temperatures with a sleeping bag, blanket or lawn chair. Orient yourself with your feet towards east, lie flat on your back, and look up, taking in as much of the sky as possible. In less than 30 minutes in the dark, your eyes will adapt and you will begin to see meteors," the space agency recommends.

"Be patient — the show will last until dawn, so you have plenty of time to catch a glimpse," it adds.

EarthSky has a page dedicated to finding the best places on Earth to stargaze. You can also determine meteor shower activity by location here.

Where do the Leonid meteors come from?

Meteors come from leftover comet particles and bits from broken asteroids, NASA explains online. The pieces of space debris that interact with our atmosphere to create the Leonids come from the comet 55P/Tempel-Tuttle.

When comets come around the sun, such as the comet 55P/Tempel-Tuttle does once every 33 years, the dust they emit gradually spreads into a dusty trail around their orbits.

Every year, the Earth passes through these trails of debris — which allows the bits to collide with our atmosphere where they disintegrate to create fiery streaks in the sky.

A meteor lit up the night as it crossed the sky above of Brittany, France, on Sept. 5, 2021. Credit - Damgan La Roche Bernard Tourisme via Storyful

The Leonid shower is famous for producing meteor storms, according to EarthSky. Its parent comet Tempel-Tuttle releases fresh material every time it approaches the sun every 33 years, prompting the periodic storms.

Other celestial events in November 2021

November will also come with a partial lunar eclipse, which is the second partial eclipse of 2021 and will be the longest such event within a stretch of 1,000 years.

"The next time Earth will see a partial lunar eclipse as lengthy as this month’s will be on February 8, 2669," EarthSky wrote.

Observers in North America, Alaska, eastern Australia, New Zealand and Japan will be able to see the entire partial lunar eclipse. It will peak at its maximum early on Nov. 19 in North America, starting at 2:19 a.m. ET and ending at 5:47 a.m. ET.

Earlier this month, stargazers were treated to another event in which the distant blue planet Uranus reached its closest point to Earth. The planet reached a point in its orbit known as "opposition," meaning that it was opposite the sun from the vantage point of Earth.

As a result, Uranus became possible to see with the naked eye — though it was likely quite faint.

"Although Uranus is not considered a visible planet, at opposition it is bright enough to be visible for someone with excellent eyesight under very dark skies and ideal conditions," NASA said in a statement last month.

RELATED: Uranus will shine its brightest, may be visible to naked eye in night sky