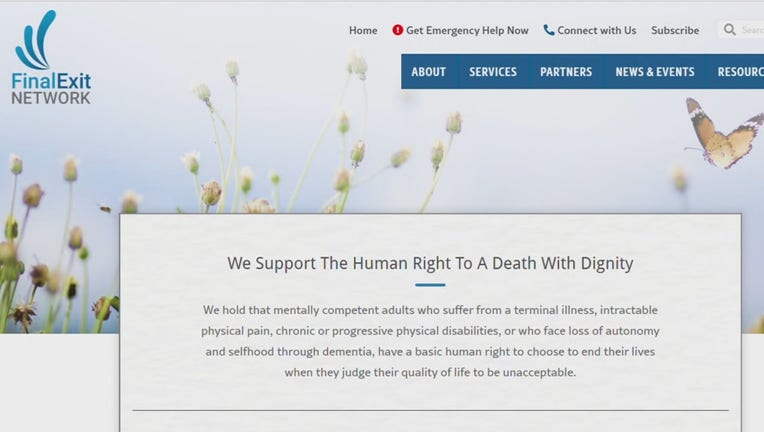 A case in Columbia Heights, Minnesota is under investigation over the nonprofit Final Exit Network.

COLUMBIA HEIGHTS, Minn. (FOX 9) - Minnesota’s assisted suicide statute is being challenged as unconstitutional, while a national nonprofit is defending its right to choose suicide.

The Final Exit Network was once convicted of a felony in connection to the suicide of an Apple Valley woman. The latest legal battle over Minnesota’s assisted suicide statute traces to a Columbia Heights neighborhood near LaBelle Park.

A case regarding Minnesota's assisted suicide statute remains under investigation for any possible criminal wrongdoing.

According to a search warrant obtained by FOX 9, a 37-year-old woman suffering from an apparently incurable and terminal disease had contemplated suicide. On May 4, two members of the Final Exit Network visited her home, but the woman’s husband insisted her "plan" was canceled and he called police. Authorities would arrive minutes later to question the pair, known as guides for the national non-profit.

The website describes the Final Exit Network’s mission to inform qualified individuals in end-of-life options to terminate pain and suffering.

While no arrests were made that day and no suicide attempt took place, investigators seized a couple bags from the men, writing in the warrant that they believed, might contain items to assist the woman in ending her life, perhaps even hazardous materials, like gases.

An Anoka County judge signed off on the search. It does not detail what was found inside the bags.

As a pre-emptive strike, attorneys for the Florida-based organization rushed to federal court asking a judge to bar the county from charging the two men and furthermore, requested the judge toss out Minnesota’s assisted suicide statute entirely, arguing it is unconstitutional.

The case itself remains under investigation. In fact, prosecutors at the Anoka County Attorney’s office told FOX 9 they still don’t have the file from the sheriff’s office. It’s not even clear if a crime occurred in Columbia Heights.

"I don’t think there was a crime in this situation," said Joe Tamburino, a Minnesota attorney who is not connected to the case.

Tamburino points out some of the concerns with Minnesota’s assisted suicide statue and how prosecutors and judges might define the terms "advises" and "encourages".

The Final Exit Network representatives believe the law infringes on First Amendment rights and they want the federal courts to step in before their two guides find themselves arrested and charged.

"In order for you to criminalize something, you have to physically do something," said Tamburino. "It can’t just be words. And if it’s words, then it has to be such a level of words that it survives strict scrutiny."

The Anoka County Attorney now has 21 days to respond in federal court. Their office did not provide further comment.