WASHINGTON - Los Angeles native and national youth poet laureate Amanda Gorman, 22, shined in one of the most talked about moments during Joe Biden's inauguration ceremony as she shared a powerful message.

Gorman called out to the world "even as we grieved, we grew" as she read her poem "The Hill We Climb."

She referenced everything from Biblical scripture and "Hamilton," and at times echoed the oratory of John F. Kennedy and the Rev. Martin Luther King Jr. With urgency and assertion she began by asking "Where can we find light/In this never-ending shade?" and used her own poetry and life story as an answer.

Gorman says she was not given specific instructions on what to write, but was encouraged to emphasize unity and hope over "denigrating anyone" over the departure of President Donald Trump.

The poem’s title suggested both labor and transcendence.

"The Hill We Climb" reads in part:

In the norms and notions of what just is
Isn’t always justice
And yet the dawn is ours before we knew it
Somehow we do it
Somehow we’ve weathered and witnessed
A nation that isn’t broken
But simply unfinished. 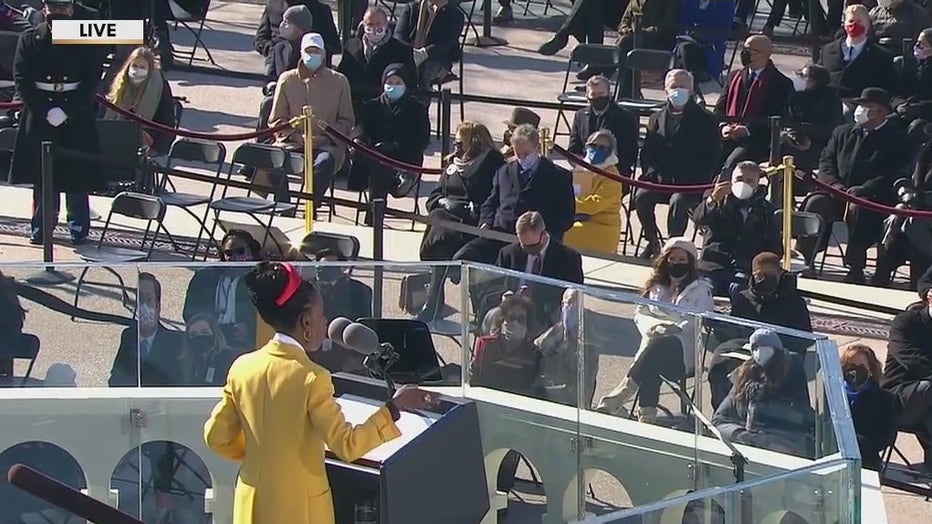 Another expert from her beautiful poem reads:

We’ve seen a force that would shatter our nation rather than share it,
Would destroy our country if it meant delaying democracy.

And this effort very nearly succeeded.
But while democracy can be periodically delayed,
It can never be permanently defeated.

In this truth, in this faith we trust.
For while we have our eyes on the future,
History has its eyes on us.

She continued a tradition — for Democratic presidents — that includes such celebrated poets as Robert Frost and Maya Angelou. The latter’s "On the Pulse of Morning," written for the 1993 inauguration of President Bill Clinton, went on to sell more than 1 million copies when published in book form. Recent readers include poets Elizabeth Alexander and Richard Blanco, both of whom Gorman has been in touch with.

Gorman is the youngest inaugural poet in memory, and she has made news before. In 2014, she was named the first Youth Poet Laureate of Los Angeles, and three years later she became the country’s first National Youth Poet Laureate.

Michelle Chahine Sinno watched with pride. "I’m so proud of her and amazed, but at the same time I’m not amazed because I knew she was going to do great things.’’

Keren Taylor was also watching. "We know that young girls voices matter, no matter what background, they have the power to unite us and give us hope.’’

Keren runs an LA based after school program called WriteGirl. It exists to inspire creativity and expression in girls, and Gorman was there as a teenager. The young poet then moved to Cambridge, MA after getting a full ride to Harvard where she graduated with a Sociology degree.  Her mother, a teacher, raised her and her twin sister as a single mom. Though you couldn’t tell today, Gorman had a speech impediment that made public speaking difficult. She, like President Biden whom she spoke in front, both overcame that.

How Amanda Gorman got her start

We speak with Keren Taylor who runs an LA based after school program called WriteGirl. It's where the young Amanda Gorman got her start. Taylor tells us how the program aims to inspire young girls in writing and reading.

Gorman was already quite well known before the spotlight hit, but this is a whole new level of acclaim and appreciation. She has appeared on MTV; written a tribute to Black athletes for Nike; and has two-book deals with Viking Children’s Books. The first work, the picture book "Change Sings," comes out later this year.

Gorman says she was contacted late last month by the Biden inaugural committee. She has known numerous public figures, including former Secretary of State Hillary Rodham Clinton and former first lady Michelle Obama, but says she will be meeting the Bidens for the first time. The Bidens, apparently have been aware of her: Gorman says the inaugural officials told her she had been recommended by the incoming first lady, Jill Biden.

In an earlier interview, Gorman said she plans to run for president herself perhaps in 2036.