(FOX 9) - Jurors in the trial of Derek Chauvin began deliberations Monday afternoon and were issued a set of instructions from the court.

Among the guidance given by Judge Peter Cahill and the Hennepin County District Court was what the jurors must consider in the case, some definitions of key terms, what counts Chauvin faces in the case, how to go about asking questions of the court and how to select a foreperson to lead the deliberations.

The Derek Chauvin trial jury was given their final instructions before beginning deliberations Monday afternoon.

Cahill reminded the jurors that to reach a verdict, whether guilty or not guilty, the decision must be unanimous. The three charges must also be considered separately. 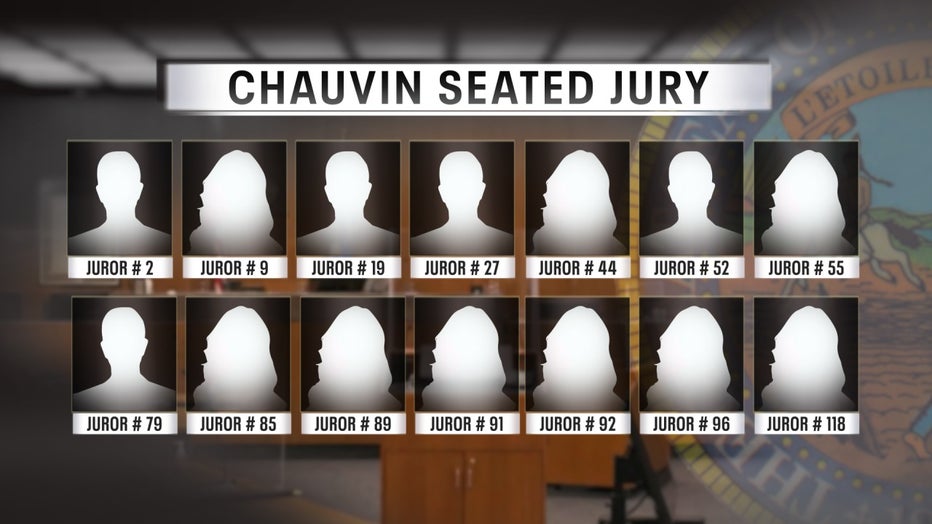 In the Derek Chauvin trial, there are 12 jurors and 2 alternates. (FOX 9)

In reading the instructions to the court, Cahill concluded with a renewed call for the jurors’ attention.

"This case is in your hands as judges of the facts," Cahill said. "I am certain that you must realize that this case is important and serious, and therefore, deserves your careful consideration."

‘Presumption of innocence’ and ‘reasonable doubt’

Judge Cahill reminded the jury that Chauvin is to be presumed innocent until he has been proven guilty beyond a reasonable doubt.

Here are the charges the jury is deliberating as explained by the jury instructions.

Definition: Under Minnesota law, a person causing the death of another person, without intent to cause the death of any person, while committing or attempting to commit a felony offense is guilty of the crime of Murder in the Second Degree.

Definition: Under Minnesota law, a person causing the death of another by perpetrating an act eminently dangerous to others and evincing a depraved mind, without regard for human life, but without intent to cause the death of any person, is guilty of Murder in the Third Degree.

Definition: Under Minnesota law, whoever, by culpable negligence, whereby he creates an unreasonable risk and consciously takes the chance of causing death or great bodily harm to another person, causes the death of another is guilty of Manslaughter in the Second Degree.

Authorized use of force

The court also clarified rules on reasonable force by a police officer in the state of Minnesota.

"No crime is committed if a police officer’s actions were justified by the police officer’s use of reasonable force in the line of duty in effecting a lawful arrest or preventing an escape from custody."

Jury questions, jury notes and a reminder about bias

In a hodgepodge of guidelines for the jurors, the court explained how it would answer any questions from the jurors, warning that it would take some time to do as counsel must be incorporated into the process.

Also, the judge told the jurors they could use their notes taken during the trial, but only to aid their memories. He said the notes are not considered "conclusive."

Finally, Cahill asked jurors to be mindful of any implicit biases they might bring with them to this case in an effort to ensure impartiality. Cahill said the following:

We all have feelings, assumptions, perceptions, fears, and stereotypes about others. Some biases we are aware of and others we might not be fully aware of, which is why they are called "implicit" or "unconscious biases." No matter how unbiased we think we are, our brains are hardwired to make unconscious decisions. We look at others, and filter what they say, through the lens of our own personal experience and background. Because we all do this, we often see life and evaluate evidence in way that tends to favor people who are like ourselves or who have had life experiences like our own. We can also have biases about people like ourselves. One common example is the automatic association of male with career and female with family. Bias can affect our thoughts, how we remember what we see and hear, whom we believe or disbelieve, and how we make important decisions.