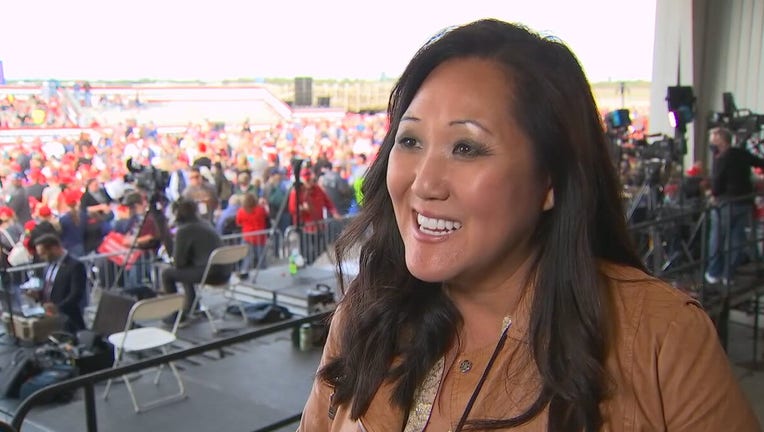 MN GOP Chair Jennifer Carnahan is interviewed at a rally.

Carnahan made the announcement minutes after the Minnesota GOP Executive Board narrowly voted to give her a severance package of 3 months' pay worth about $36,000. The vote was 8-7; Carnahan cast the deciding vote.

"At this point, it's in the best interest of the party and my mental health to resign from my position as chairwoman," Carnahan said in an emailed statement.

Party officials now must call a State Central Committee meeting within 45 days, where nearly 350 delegates will choose a new chair.

Carnahan was initially seeking $100,000 in severance pay worth about 8 months of her salary, three GOP sources told FOX 9. But some board members were refusing to pay any severance.

That left the board deadlocked, with seven members in support of the lower severance amount and seven members opposed. There was discussion among Executive Committee members in the room about whether Carnahan, the board's 15th member, could break the tie.

"Can you believe that?" one disgusted member said after leaving the meeting.

Carnahan's support on the GOP's Executive Committee and elsewhere within the party has crumbled after the arrest of close friend and big donor Tony Lazzaro on child sex trafficking charges last week. In her resignation letter, Carnahan said she had "no knowledge or involvement in those activities."

Over the past three days, several former party staffers and young Republicans have stepped forward to accuse the chairwoman of running an organization where verbal abuse, intimidation and sexual harassment is pervasive.

"It is unfortunate that the mob mentality has come out in this way to defame, tarnish and attempt to ruin my personal and professional reputation," Carnahan said in her resignation statement.

On Tuesday, before the growing list of accusations from party staffers, Carnahan vowed to fight on. The chairwoman said she would call a meeting of the State Central Committee for after Labor Day, citing the 67 percent vote she got among delegates in her spring re-election bid.

That plan appeared to have changed by Thursday morning. Senate Majority Leader Paul Gazelka said he'd spoken with Carnahan and her detractors and expected Carnahan's status to be resolved at Thursday evening's Executive Committee meeting.

Also on Thursday morning, former Executive Director Andy Aplikowski said Carnahan appeared to know in July of close friend and donor Tony Lazzaro's legal situation, refuting Carnahan's earlier comment that she did not know of the accusations against Lazzaro until his Aug. 12 arrest.

Aplikowski also said the party took a $5,000 contribution from Lazzaro in July. Since the check was to the Minnesota GOP's state account, it doesn't need to be made public until next year under Minnesota's campaign finance disclosure requirements.