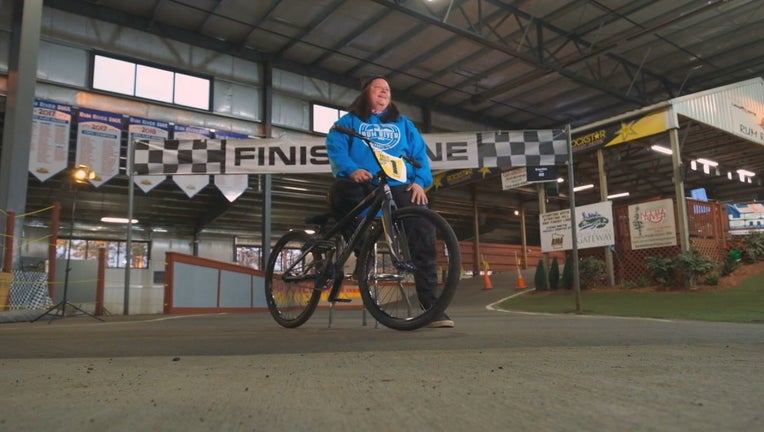 ISANTI, Minn. (FOX 9) - On just about any night of the week, Rum River BMX in Isanti, Minnesota is full of riders. While many are in their teens, a mother of two in her late 40s also calls the track home.

"It’s a sprint. You are out of breath. You are just elated the whole time,” said Kelly Laszlo, a BMX rider. “There are just so many aspects to it. It just captivated me immediately."

On just about any night of the week, Rum River BMX in Isanti, Minnesota is full of riders. While many are in their teens, a mother of two in her late 40s also calls the track home.

Laszlo has always had an affinity for bikes.

"Kids growing up in my neighborhood were all BMXers, had the bikes,” she said. “My mom wouldn't buy me a bike because I was a girl. I wasn't allowed the BMX bike. So I was always taking off on their bikes. They were teaching me how to jump, skills I wish I still had. I would ride, but I hadn't raced. I didn't even know this was a thing."

It wasn't until a friend got back into BMX bike racing and convinced her to tag along three years ago that she discovered she had both a knack and a newfound love for the sport.

“I was scared,” said Laszlo. “I was scared of the gate. By the end of the night, I was balancing on the gate. I think I raced my first race that next weekend."

Since then, Laszlo has been a fixture at Rum River, pedaling her way through the twists and turns of the 1,000-foot long dirt track once or twice a month.

"My kids think it’s really cool,” said Laszlo. “I'm so used to this type of activity - I don't think it even phased my husband. He was like, ‘Ok she is doing this now. Ok.’ I try to get him on a bike, but he just won't ride a bike."

She has also competed in about 50 races, taking first place for the women's cruiser class in her age group at the Gold Cup regional championships last month and second place in the same category at the state championships last weekend.

"My friend laughs,” said Laszlo. “I have a trophy room. When I first got it all decorated, he said, ‘You have the room every 12-year-old boy dreams of,’ and he's not wrong. I think it’s a little unusual just because most of the people my age have kids who are racing. Lot of the dads, they raced in the ‘80s and ‘90s and now their kids are of age. It’s in their blood right, so they have to get back on the track and ride too.”

As a freelance camera operator for several professional sports teams like the Minnesota Twins and Minnesota Timberwolves, Laszlo is used to being one of the few females in a male-dominated field, but she says more women are getting involved in BMX bike racing for the physical benefits and as a way to connect with their kids.

"I would say it's a sport you don't necessarily have to have a specific body type for,” she said. “You can be older. You can be heavier. Have bad joints. For the most part, bike riding is low impact. It hurts my knees less than running, but it is a full body workout. You do get the exercise."

Laszlo says her goal this year is show her male counterparts a woman can be stiff competition when she races against them in novice events.

"I think the guys expect to beat us,” she said. “I think they are always surprised when one of us comes on the track and just schools them."
She has no plans to cross the finish line for her favorite sport for quite a while.

"I'll do it as long as I can,” said Laszlo. “I have so many goals I am working towards before I am ready to even think about backing down."