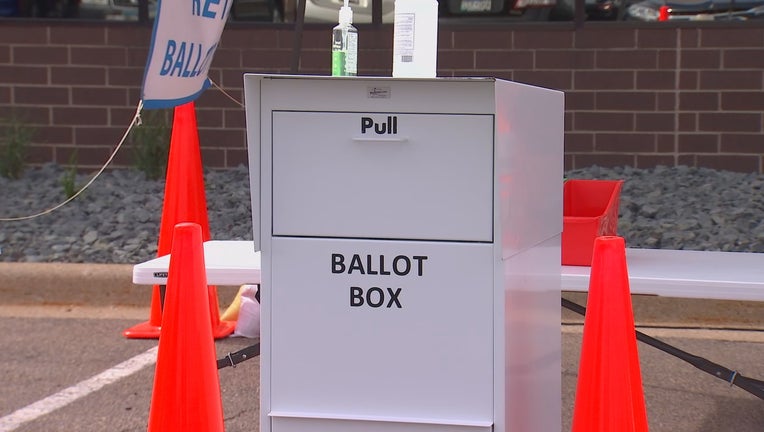 MINNEAPOLIS (FOX 9) - It is a record year for early voting in Minnesota and, in Minneapolis, you don’t even need to get out of your car to cast your ballot.

So far, officials say the number of people using early voting is three times greater than in the past.

It is a record year for early voting in Minnesota and, in Minneapolis, you don’t even need to get out of your car to cast your ballot.

"Cumulative, as of today, we’ve mailed out more than 100,000 ballots and previously the most we ever sent out was 31,000," said Minneapolis Elections Administrator Jeff Narabrook.

Holding an election in the middle of a pandemic means lots of changes and safety measures including a drive-up ballot drop for those who got a mail-in ballot but want to make sure it gets to where it's going.

Minneapolis’ new ballot drive-thru drop-off service starts Friday, Aug. 7. Voters can drop off their mail-in ballot from the safety of their car or by bike. They can also drop off a ballot for another voter, provided they show their ID and complete some brief paperwork.

"We created a space where people can just pull up behind me here, drop off their ballot," said Narabrook. "They don’t even have to get out of their car. They can come in their bike and don’t even have to come into the building to do that.”

Even if you didn’t ask for a mail-in ballot, you can show up to the early vote center in your county and request to vote curbside, never needing to leave the comfort of your car.

Because at this point, election officials say to be safe you should be dropping that ballot off in person.

"You can still send it in the mail but each day, because of the length of time to get here, it reduces the chance will get there," said Narabrook.

But, for the traditionalist, in-person voting will still be an option.