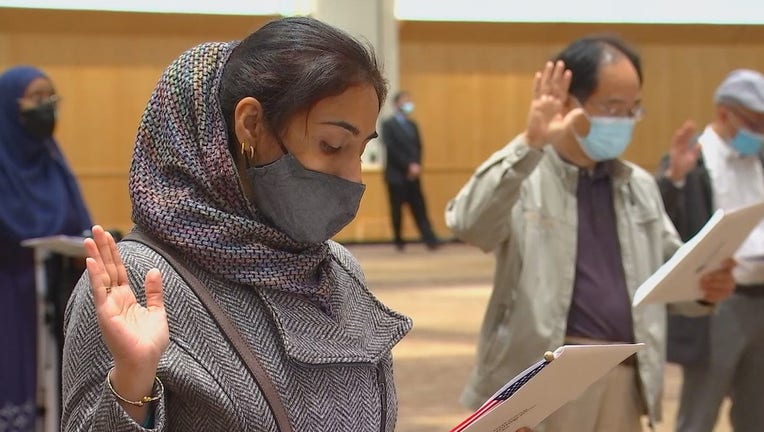 A woman raises her hand during a naturalization ceremony to become a U.S. citizen. (FOX 9)

ST. PAUL, Minn. (FOX 9) - Nearly 800 people who arrived to America from countries around the world are now U.S. citizens.

Friday morning, the U.S. District Court in St. Paul held its first in-person naturalization ceremony in months at the River Centre. For so many new citizens, this marked a new beginning.

Nearly 800 people who arrived to America from countries around the world are now U.S. citizens.

"It just feels truly honorable to be here," said Charanchandra Veergunuru, a new U.S. citizen who came from India.

For some, the journey toward U.S. citizenship began decades ago. Mustafa Ozturka and his wife are from Turkey.

Those who were naturalized represent dozens of countries from around the world. For Ann Gibbon, a dream is finally realized.

"I’ve lived here for more than 55 years and my family said it’s time," said Gibbon, who is from Germany.

Like those she stands beside, citizenship brings with it new opportunities.

"Content and happy to be voting. That was something that legally I could not do," said Gibbon.

"It just feels complete and it’s a good thing that I did it, even though I waited forever," she added.