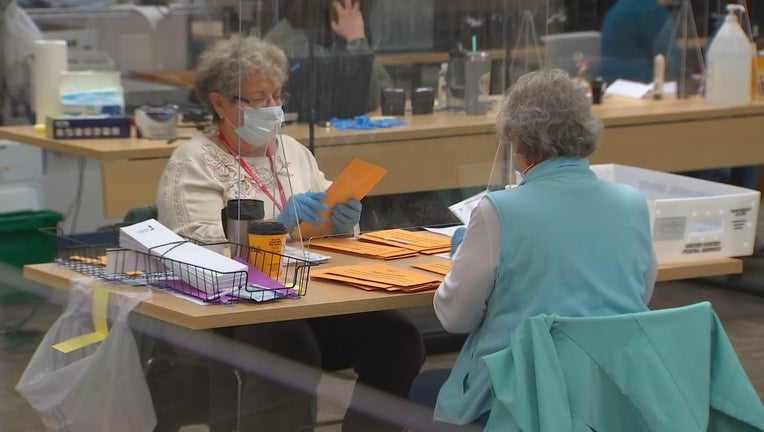 ST. PAUL, Minn. (FOX 9) - The Minnesota Secretary of State says more than 1.5 million absentee ballots have been accepted during the 2020 Election and those voters can track the status of their ballot using a handy website.

You can check the status of your absentee ballot at mnvotes.org/track. It can tell you whether your ballot was received by election officials on which date it was received and whether it has been counted or is still being processed.

What happens to your ballot after you vote early?

Will all the mail-in ballots and early voting slow down results on Election Day? Election officials say early votes are already being counted.

For the 2016 election, Minnesota had a turnout of 2,968,281 voters, meaning a good portion of Minnesota voters this year will want to check on the status of their ballots online ahead of Election Day.

If you voted early or plan to, your ballot is being counted now and will be included in Tuesday’s results, according to the Secretary of State’s Office.

“So, the ballot is not sitting around waiting to be processed,” said Secretary of State Steve Simon. “It will be processed fairly immediately and put into a machine.”

Beginning last Tuesday, any vote cast early, dropped off or mailed-in is already being counted.

“Now, there’s no tallying done,” Simon said. “It’s just that the individual ballot and the voters choices are recorded, but they aren’t all added up together into a tally until after the polls close on Election Night.”

On Election Night, the votes will be tallied up with the ones cast that day all together.

“They’re all mixed in the same pot and on Election Night, after the polls close at 8 p.m., then they can all be added together,” Simon added.

Once it has been processed, you can’t go vote again.

Because so many are voting early and a lot of the requested vote-by-mail ballots are coming in already, Simon doesn’t expect Minnesota’s results to drag on.

“In terms of the absentee vote, both in person and absentee and the mail vote, I think we will have substantially all or all of those votes included on Election Night,” Simon said.