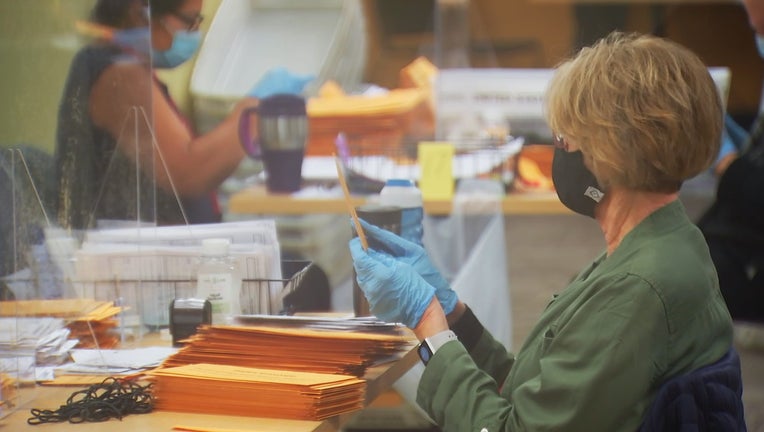 Election workers in Ramsey County process absentee ballots so they will be ready for counting on election night on Nov. 3, 2020. (FOX 9)

ST. PAUL, Minn. (FOX 9) - Counties across Minnesota are getting ready to process absentee ballots on Election Day. With more than a million absentee ballots requested this year, processing all of them is a going to be a challenge.

“The ballot comes in, it’s given to our ballot board that is staffed of election judges,” said Heather Bestler, the deputy elections director for Ramsey County. “Those election judges either accept or reject the ballot given the information given on the signature envelope.”

How are absentee ballots counted?

With more than one million absentee ballots requested in Minnesota for the upcoming election, a look inside how they are counted.

Bestler explains after a ballot is accepted, it will end up in a counting center. Wednesday was the first full day Minnesota counties could start taking absentee ballots out of envelopes and prepare them to be counted.

“To be able to process the amount of ballots that are coming in, we had to just about double the amount of staff we have on,” said Bestler.

The votes on absentee ballots aren’t officially tallied until election night, but it still takes people power to process them beforehand. Ramsey County has already received a record-breaking number of absentee ballots - more than 104,000 - with more to come before Election Day.

“It continues to get busier every single day,” said Michael Stalberger, elections director for Blue Earth County, which includes Mankato. “We knew we had to get started right away. We just have that high of a volume.”

“Everybody’s got scale issues with this election,” said Stalberger. “Our scale issue just means that we went from 6,000 ballots for a rough measure to 14,000.”

They’ve also had to bring in extra staff to ensure all ballots are processed in time.

“For our staff it’s quite an undertaking,” he said.

The counting process will continue even after Election Day. That’s because this year as long as a ballot is postmarked by Election Day and received by the county within a week after the election – it will count.