GENEVA - As many as half a million people or more could flee from Afghanistan after the Taliban’s takeover in the coming months in a "worst-case scenario," the U.N. refugee agency said Friday.

The U.N. High Commissioner for Refugees (UNHCR) said the situation in Afghanistan following the Taliban’s rise to power last week and a pair of deadly suicide attacks outside the Kabul airport "remains uncertain and may evolve rapidly," with up to 515,000 new refugees fleeing.

The agency said that would add to the 2.2 million Afghans who already are registered as refugees abroad — nearly all of them in Pakistan and Iran.

"The upsurge of violence across the country and the fall of the elected government may have a serious impact on civilians and cause further displacement," the UNHCR plan said.

The agency cited estimates that 558,000 people have been internally displaced within Afghanistan due to armed conflict this year alone – four in five of them women and children.

"UNHCR estimates that the number of displaced will rise, both internally and across border," it said. 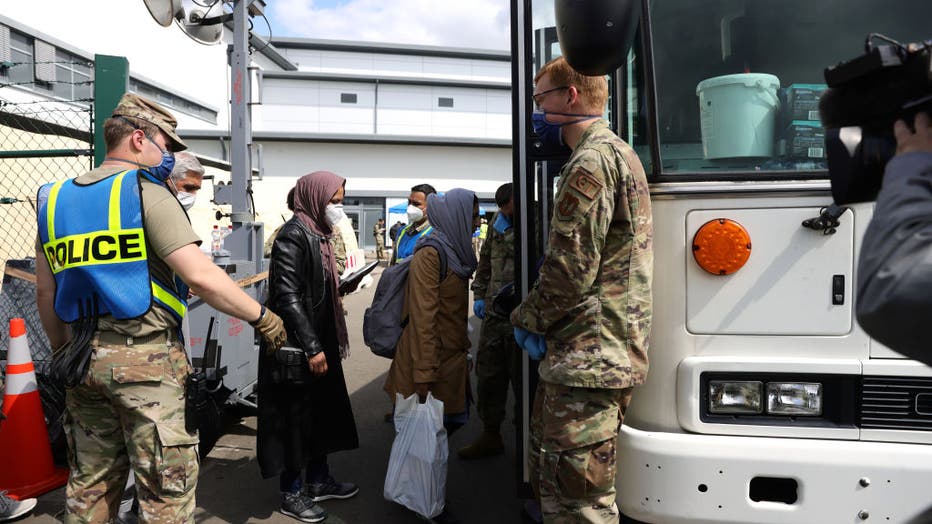 Evacuees from Afghanistan walk from a temporary tent to a bus at Ramstein Air Base on Aug. 26, 2021, in Ramstein-Miesenbach, Germany. (Photo by Andreas Rentz/Getty Images)

Najeeba Wazedafost, CEO of the Asia Pacific Refugee Network, in an online UNHCR news conference on Friday, warned of "coming darkness" in Afghanistan amid a "tragically intertwined series of crises."

The U.N. agency is seeking nearly $300 million for its response plan for inter-agency requirements.

In addition to trying to escape through land borders, many Afghans have fled to Kabul’s international airport where scenes of chaos, desperation and horror have transfixed the world.

Images of people standing knee-deep in sewage and families thrusting documents and even young children toward U.S. troops behind razor wire have come to symbolize both the disarray of the last days of the American presence in the country and the fears Afghans have for their future.

Two suicide bombings on Thursday targeted thousands of people desperately trying to flee, killing more than 160 people, according to two officials who spoke to the Associated Press. Among the dead were 13 U.S. service members in what was the deadliest day for American forces in Afghanistan since August 2011.

Evacuation flights from the capital resumed with new urgency on Friday, as U.S. officials warned more attacks could come. But despite the risks, anxious crowds outside the city’s airport appeared as large as ever — acutely aware that the window is closing to board a flight before the airlift ends and Western troops withdraw.

RELATED: Kabul airport suicide attacks: 'We will hunt you down and make you pay,’ Biden says