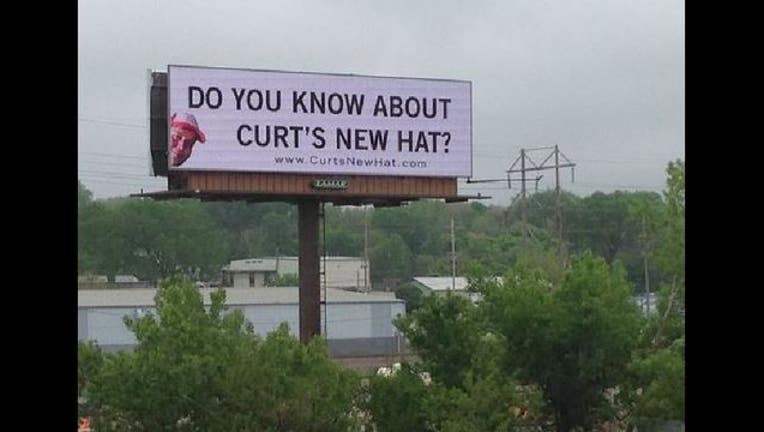 Curt Oren, 23, is probably the world's biggest jokester. The Minneapolis-based musician recently bought a billboard just to let everyone know about his new hat.

"I admitted to myself that I have become addicted to jokes and have hit rock bottom," Curt said. "I spent every dime I have on a billboard to promote my new hat."

Curt told Fox 9 that when he was young he used to be in a circus. So we asked him where the circus was and what he did, he said "in my room, it basically just consisted of me running around with a pillow case on my head."

Fast forward about 10 years of joking, Curt and his friends came up with the idea of getting a hat that says "Curt's New Hat."

Here's a timeline of his jokes going hilariously too far:

A few years ago he made a shirt with his own face on it -- "At first, it started small," his friend Ben said.

Then he wore the same striped pajamas for 18 straight days and broke two phones because the PJ's didn't have pockets.

"Then he waged a fabricated smear campaign against planet fitness for an entire month," Ben said. "Things were started to get a little out of hand. Then he got a new hat."

He then got a shirt that said "DO YOU KNOW ABOUT MY NEW HAT?" -- which was obviously worn with his hat.

He then changed his Facebook name to New Hat, and people started calling him New.

Then, the license plate on his car said NEW HAT.

"We all thought okay, this must be it," Ben said. "Then as I was driving along Interstate 380 I saw it."

The billboard is located in Cedar Rapids, Iowa on I-380 just south of 33rd Avenue. Oren is originally from Iowa City, where he attended a non-profit arts organization called Public Space One. PS1 is an "experimental platform for multiple forms of creative expression." He said the organization is what inspired him.

"The large point the billboard makes is what exactly art is and why that needs to be valued," Curt said.

A majority of donations for Curt's New Hat are going towards the Curt Oren Memorial Institute for Comedic Safety, a division of the Iowa City non-profit arts organization that "teaches future generations about creating large scale jokes in a safe and fun manner."

Curt said he wants to "promote the idea that we are pretty much free to do whatever we want, try whatever we want, and do fun things that excite us and make us feel good. There doesn't always have to be a reason or a why… it can just be a ‘hey, this is a funny idea I have.'"