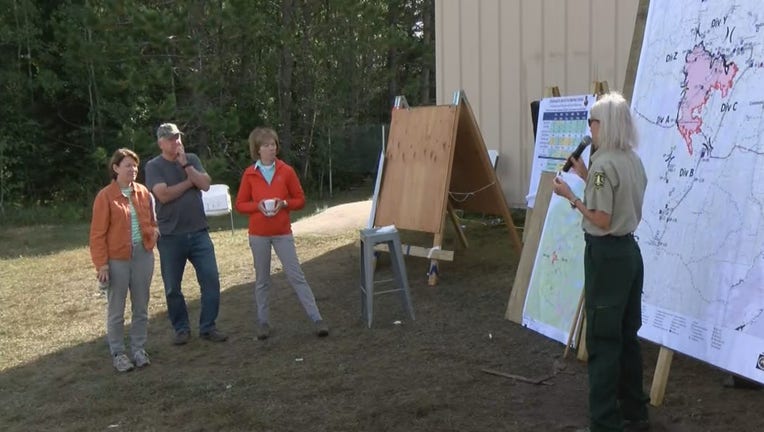 (FOX 9) - It’s been a month since the Greenwood wildfire was started by a lightning strike, and it’s the first time Governor Tim Walz and Senators Amy Klobuchar and Tina Smith have been able to look at the damage up-close.

As the governor assessed the damage, he said this year’s wildfire season is unlike anything Minnesotans have seen before.

Gov. Walz along with Senators Smith and Klobuchar toured the damage from the Greenwood wildfire and spoke about bills they are working on to address what's needed for recovery.

"It’s usually September when our fire season starts. We’ve already had close to 1,900 fires that have burned five times more acres we've seen on an average," he said.

The trio spent a lot of their day thanking emergency crews as there are more than 300 first responders battling the wildfires for 12 hours or more a day.

They also asked a lot of questions.

The senators are trying to figure how to best help fire crews through bipartisan legislation - known as the Reconciliation Bill - they’re working on in Congress.

"I’m quite focused on the work that we have to do. When I go back to Washington with Senator Klobuchar next week to get these bills passed that includes significant resources to help suppress fires in the future," Sen. Smith said.

"I think $45 billion… that would go to fires, and that includes things like firefighters. That includes significant grants to local communities," Sen. Klobuchar added.

As for Gov. Walz, he’s also concerned about how small businesses were impacted by the fire and plans to work with the state legislature to help them.

"In a year that has been incredibly difficult with all things from COVID on, and now to be not having business because roads are closed down and resorts are closed down…that's a tough one," he said.

First responders say they have contained at least 49 percent of the Greenwood wildfire, and they are expecting that to increase in the coming days.