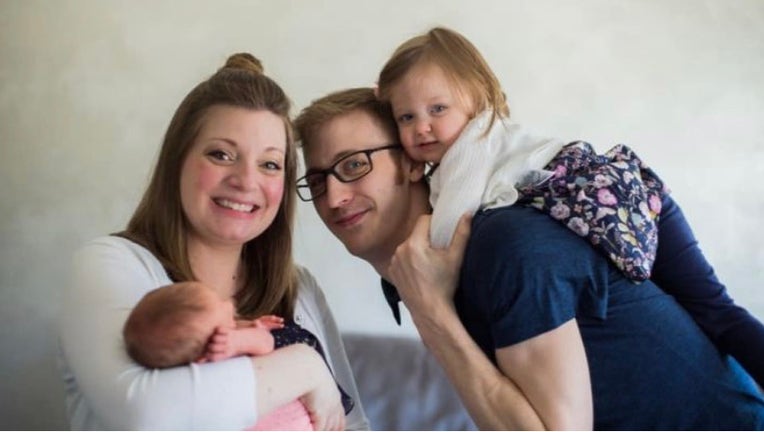 Jacob Babcock (middle) was shot while he tried to stop an apparent carjacking in south Minneapolis.

MINNEAPOLIS (FOX 9) - A man is recovering at the hospital after he was reportedly shot while trying to come to the rescue of woman during an apparent carjacking in south Minneapolis.

Jacob Babcock’s sister and his best friend couldn’t be prouder after the 34-year-old Sherwin Williams store manager, who rushed outside of his Lake Street shop around noon Tuesday to come to the aid of a woman in distress.

A man is recovering at the hospital after he was reportedly shot while trying to come to the rescue of woman during an apparent carjacking in south Minneapolis.

“I was partly mad at him after I knew he was ok because he is my baby brother and he doesn’t hesitate to help anybody,” said Kristina Martin, Jacob’s sister.

According to Babcock’s account from the hospital, he and a co-worker heard her screaming as two suspects each pointed a gun at her in an apparent attempt to steal her car. Startled by Babcock, the suspects shot him in the back as they took off.

“It doesn’t sound like he took anytime to think about, ‘These guys might pull a gun on me.’ It was, ‘How do I help this woman?’” said Kyle Parsons, Babcock’s best friend.

“He has a chest tube in and then they’re cleaning his gunshot wound because of the entry in back, no exit and kinda watching bullet fragments right now,” said Martin.

Martin says Babcock, a husband and father of two young children, is in intensive care with injuries to his shoulder blade, ribs, and lung.

His story of bravery as a good Samaritan just trying to help in a scary situation has resonated on GoFundMe sites, where about $30,000 has been raised for his family.

Family told FOX 9 when Babcock woke up in the hospital, his first concern was for the woman who he tried to help as well as his employees who witnessed the shooting in broad daylight.

“I think he’d do it again as he is always looking out for people,” said Parsons. “He doesn’t have enough regard for himself and that’s a beautiful quality.”

Because of the nature of Babcock’s injuries and where the bullet was lodged, his loved ones believe he may have been shot right while he was turning to get a license plate on the fleeing vehicle.

The Minneapolis Police Department says it has made no arrests in the case. There has been a recent uptick in violent crime with armed suspects in Minneapolis, targeting people and cars even in the middle of the day.