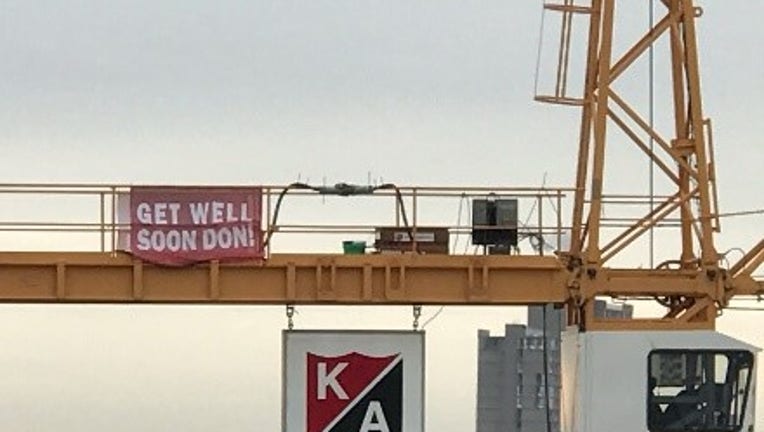 This get well banner unfurled outside Hennepin Healthcare is for a burn victim who has watched this construction crew work during his lengthy recovery.

MINNEAPOLIS (FOX 9) - Nearly two months after Don Kellner was hospitalized with severe burns following an explosion at his Cold Spring home, a special get-well banner was unfurled on a giant construction crane outside his hospital window to raise his spirits.

Heidi Stalboerger, Kellner’s daughter, said her dad is lucky to have survived the Sept. 9 explosion.

Get well banner unfurled for burn victim outside Minneapolis hospital

Nearly two months after Don Kellner was hospitalized with severe burns following an explosion at his Cold Spring home, a special get-well banner was unfurled on a giant construction crane outside his hospital window to raise his spirits.

Kellner, 85, went to fire up his furnace for the season in Cold Spring when there was a gas explosion. He was thrown to the ground and was literally on fire when his wife came to the rescue.

“At the HCMC burn unit, the nurses labelled him the Miracle Man because he had such a bleak prognosis,” said Stalboerger. “I guess, they just know my dad.”

Kellner ended up with deep second and third-degree burns over nearly 15 percent of his body. At his advance age, there wasn’t much hope initially.

He survived two skin graft surgeries and is now to the point where he is receiving outpatient care.

A special, get-well banner was unfurled this week outside of his window to raise his spirits, which Stalboerger thinks will help.

“Knowing my dad watches the crane and all the workers at Kraus-Anderson hung it on the crane so he could see it, it’s pretty much at eye level for him from the apartment. He’s pretty excited about that,” she said.

Firefighters For Healing, the nonprofit foundation that works closely with burn victims and their families, was thrilled to brighten Kellner’s day during his recovery in downtown Minneapolis.

“I have known the family since they came to Hennepin Healthcare,” said Paul Wilhelm, of Firefighters for Healing. “It’s a beautiful story of survivorship and just heroics. Heroic effort to come back from where he was when he was first injured.”

It’s a gesture the family will never forget.

“They think of everything,” said Stalboerger. “They know what these people are going through. They are just so generous and kind.”