Car plows into protesters in Charlottesville

One person was killed and 19 were injured after a car crashed through protesters and into another vehicle on the street after white nationalist rally in Charlottesville, Virginia, on Saturday, August 12, 2017. (Credit: Twitter/Brennan Gilmore via Storyful)

CHARLOTTESVILLE, Va. - On the four-year anniversary of the deadly white nationalist rally held in Charlottesville, Virginia in 2017, Sen. Tim Kaine, D. Va., posted a photo to Twitter to remember the victims who lost their lives.

The chaos on Aug. 12, 2017 boiled over at what was believed at the time to have been the largest group of white nationalists to come together in a decade. The governor of Virginia declared a state of emergency, and police dressed in riot gear ordered people out. A group of white supremacists had gathered to protest plans to remove a statue of Confederate Gen. Robert E. Lee, and others arrived to protest the racism that the statue symbolized.

Several hundred counter-protesters were marching when suddenly, a silver Dodge Challenger smashed into another car, then backed up, barreling through the crowd.

The impact hurled people into the air. Those left standing scattered, screaming and running for safety in different directions. 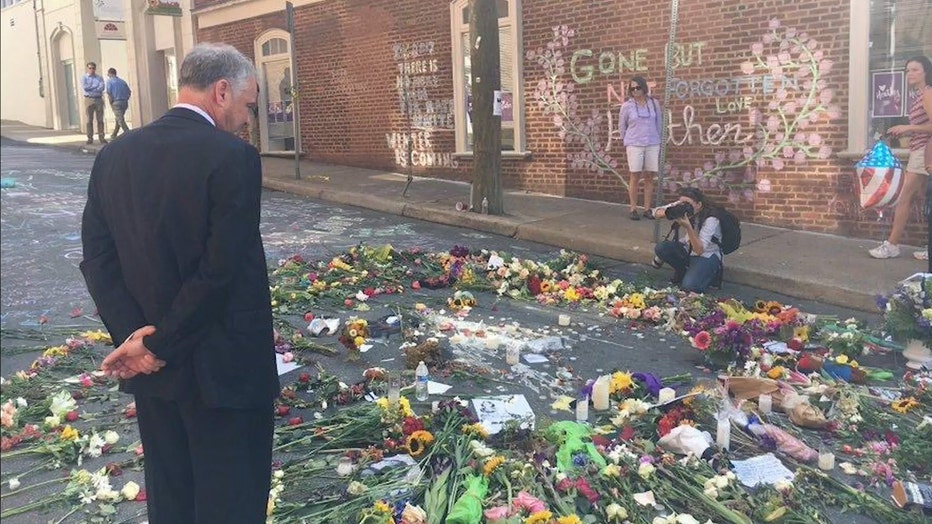 Photo of Sen. Tim Kaine visiting downtown Charlottesville on the four-year anniversary of the deadly “Unite the Right” rally.

James Fields was later identified as the driver who plowed his car into the crowd of people, killing 32-year-old Heather Heyer.

Fields pleaded guilty to 29 federal hate crimes to avoid the death penalty in March of 2019 and was sentenced to life in prison in June 2019.

On the four-year anniversary of the deadly attack, Kaine posted a photo on Twitter showing Downtown Mall in Charlottesville back in 2017 where people left flowers and messages in remembrance of the victims after the rally.

"Four years ago, white supremacists descended on Charlottesville to spread bigotry," Kaine wrote on Twitter. "Today, we remember Heather Heyer and Virginia state troopers Jay Cullen and Berke Bates, whose lives were cruelly cut short that day—and we stand against the hate that led to their deaths."

Cullen and Bates were also killed in 2017 when their helicopter crashed as they responded to the rally.

The statue of Gen. Robert E. Lee was removed on July 10, 2021, more than five years after racial justice activists had renewed a push to take down the monument.

Museums, battlefields and historical sites in Virginia and beyond expressed interest in the statues of Gen. Robert E. Lee and Gen. Thomas "Stonewall" Jackson that were removed in July of this year, according to the documents acquired by The Daily Progress. The city also received at least 18 expressions of interest from private citizens across the country.

The Charlottesville City Council still has not decided whether ownership of the statues should be transferred to a museum or other entity or whether the statues should be demolished. The city said July 13 that it would continue to accept statements of interest from entities interested in acquiring them.

In early September, the mayor will conduct outreach with the interested parties to further evaluate their interest and resources.

The Associated Press, FOX News and Storyful contributed to this report.

Editor's note: This story has been edited to reflect the correct date of the photo posted of Sen. Tim Kaine.