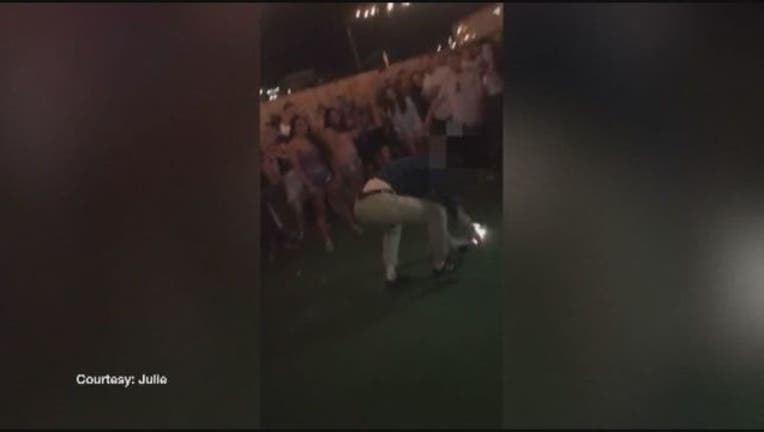 (AP) - An FBI agent accused of accidentally dropping and firing his gun while dancing at a Denver nightspot, hitting a bystander in the leg, can carry his work weapon again as he considers a possible plea deal.

A judge allowed the change to Chase Bishop's conditions for release from jail during a short court hearing Tuesday.

Bishop's lawyer, David Goddard, told Judge Fran Simonet that the FBI strongly encourages its agents to carry the service weapons when they are not working. Prosecutors did not object, so Simonet said Bishop could be armed both on and off duty.

Bishop will still not be allowed to drink or use drugs while his case is pending.

The hearing was scheduled for prosecutors to lay out the evidence against Bishop, but that was delayed after Goddard said prosecutors had offered a plea deal and Bishop needed time to consider it. He did not provide any details.

A spokesman for the Denver District Attorney's Office, Ken Lane, confirmed an offer but said he could only provide details if it was accepted.

Bishop, who lives and works in Washington, D.C., is charged with second-degree assault in the June 2 shooting at Mile High Spirits and Distillery, which was captured on video shared with local media.

Police have said Bishop, 29, was dancing when a gun fell from his waistband holster. The firearm went off when he picked it up.

Video footage shows Bishop dancing in the middle of a circle of people before doing a backflip. The gun falls to the ground mid-flip, and as Bishop picks it up, appears to go off. The video then shows the agent putting the gun back into a waistband holster and walking away with his hands up.

The bystander, Tom Reddington, was treated and released from a hospital. He hired a lawyer who advertises locally about large payouts he has gotten for his clients.

Reddington told ABC News last month that he does not blame Bishop.

"I'm not vindictive at all. I don't want to ruin his life. At this point, there's nothing we can do to fix it. So, let's just move on and deal with it as best we can," he said.