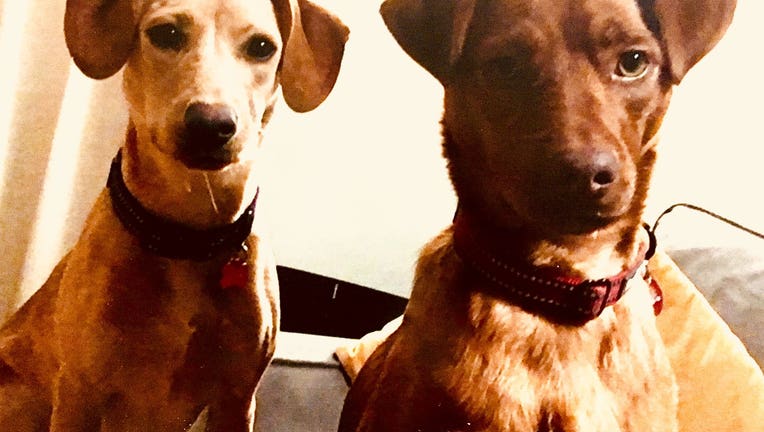 A Minneapolis family is desperate for the return of their two dogs, Lucy and Lola, after their SUV was stolen with the pets inside.

MINNEAPOLIS (FOX 9) - A Minneapolis family is desperate to get their two dogs back after their car was stolen with the pets inside.

“It happened so quick, so quick,” said Gina Rios, the dogs’ owner.

A Minneapolis family is desperate to get their two dogs back after their car was stolen with the pets inside.

Gina Rios drops off her daughter off each day at her daycare on Bloomington Avenue in south Minneapolis with their dogs Lucy and Lola coming along for the ride.

In an instant, everything changed Thursday morning. Rios parked near the door and left her car running, but didn’t think much of it for the quick drop-off.

"Walked inside, they take my daughter right at the door, came back out and gray car pulled up right next to my car," said Rios. "A woman got out and jumped right in and took off and my dogs were in the car."

She says it all happened in under 30 seconds and now her family is left heartbroken wondering where their pups are.

"Anyone who has a pet and knows that relationship that they are part of family, so to have two of them taken is really, really hard and not know where they’re at or what’s happening," said Rios.

Minneapolis police confirmed with FOX 9 they are investigating the auto theft, stating officers spotted the stolen white 2017 Buick Enclave in south Minneapolis Thursday, but the suspect took off before they could talk to them or spot the dogs.

"You don’t expect these things from your community in a place you trust and people you know, so it’s kind of sad to know this is where we’re at in Minneapolis right now," said Rios.

The family is now pleading to the public to be on the lookout for Lucy and Lola, so they can get them home safe and sound.

"It’s going to be hard sleeping tonight or hard sleeping any night until I know where they’re at or what’s happened to them, like I said when you have a pet they’re like your children," said Rios.

Rios says her family has gotten a lot of support from friends and neighbors who are out looking for the dogs. Local animal rescue groups have also been alerted. The dogs are chipped and are wearing tags.