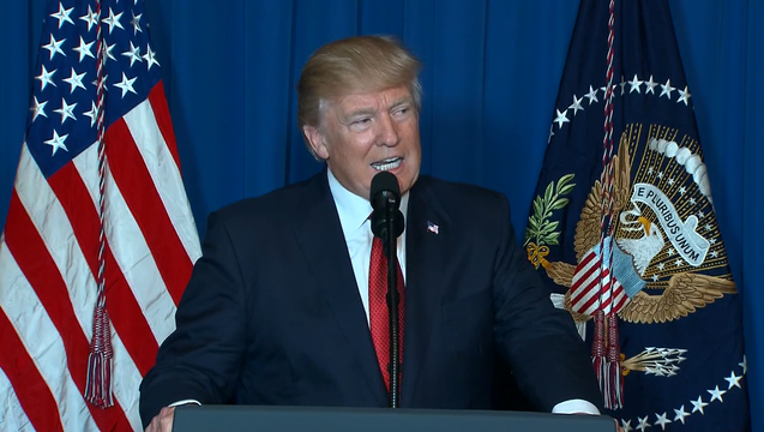 That's a widely used estimate of what each journey costs taxpayers. The figure comes from a government report on a trip President Barack Obama made to Palm Beach, Florida, but the report's author tells The Associated Press that it's a mistake to apply those findings to Trump's travel.

A conservative group that closely monitors presidential expenses puts the tab for each Mar-a-Lago visit closer to $1 million.

Neither the Secret Service, which protects the president, nor the Department of Defense, which transports presidential vehicles from place to place, has provided a tally of any Mar-a-Lago trip, although a government office is working up estimates that will eventually become public.

Why does anyone care whether Trump is frequenting Florida, and how did $3 million become the common wisdom as the cost of each visit?

Trump himself drew attention to the issue when he called Obama a "habitual vacationer" who was costing taxpayers money. He repeatedly harangued Obama about it on Twitter between 2011 and last year.

The conservative Judicial Watch estimated that Obama's travel expenses totaled at least $96 million over eight years, based on partial responses to its freedom of information requests. In December, the group's president, Tom Fitton, said Obama had engaged in "notorious abuse of presidential travel perks" and called on Trump to overhaul presidential travel.

But with seven Mar-a-Lago visits in less than three months, is Trump guilty of the same thing? Fitton says he doesn't think so but added, "It's not what we expected from him, given his criticism of Obama."

"The best thing he can do is disclose the numbers and then make the case to taxpayers that it's worth it for him to travel there," Fitton said. "It's a debatable point."

Trump's time at Mar-a-Lago appears to be a mix of business and pleasure. He's twice hosted foreign leaders there, twice used the resort as a home base for presidential or campaign events in the area and made 15 visits to his nearby golf courses. The White House doesn't say whether he's golfing.

One way Trump is saving presidential travel money: He hasn't yet journeyed overseas, though next month he plans to make a stop in Brussels.

With a Republican in the White House, liberal groups are joining Judicial Watch in keeping an eye on travel costs.

Public Citizen said it is quoting the $3 million figure from Politico and CBS. CNN has also used that number. Those estimates all trace back an October 2016 report by the Government Accountability Office.

As fate would have it, the estimate for Trump's Mar-a-Lago trips is based on a 2013 weekend golf trip Obama took to Palm Beach.

Sen. John Barrasso, a Wyoming Republican, asked the GAO to probe the Obama outing, and its report finally came out last fall.

The GAO's bottom line for that trip, not including regular White House personnel costs as well as some classified expenses, was $3.6 million. But the author of that report, Brian Lepore, says that figure shouldn't be applied to Trump's travel.

"It's hard to substitute one trip for another, even if the destination is the same," Lepore said. Each time a president travels, the Defense Department must airlift equipment such as the protective limousines, security vehicles and occasionally helicopters from various military bases around the country.

A base in Illinois is charged with moving the inventory around, and costs vary widely depending on which base it comes from, he said.

Another problem with extrapolating from the October 2016 GAO report is that it included a leg from Washington to Chicago, where Obama gave an economic speech before heading to Palm Beach for a long weekend of golf.

Obama was only in Chicago for a few hours, but costs pile up because each destination triggers the need for the Secret Service to prepare and protect the site and the Defense Department to move the equipment involved.

Another significant cost-driver, GAO noted, is the per-hour cost of military aircraft, such as the president's plane, Air Force One. So it's not just a matter of slicing off a few hundred thousand dollars to come up with the $3 million estimate.

"If you take out Chicago, that just means the equipment is going to have to come from other bases," Lepore said. Sometimes that means more money, sometimes less.

The GAO agreed to a Democratic request to price out a few of Trump's Mar-a-Lago trips, and its forthcoming report promises a more accurate estimate. The research could take months or, if the Obama report is any guide, years.