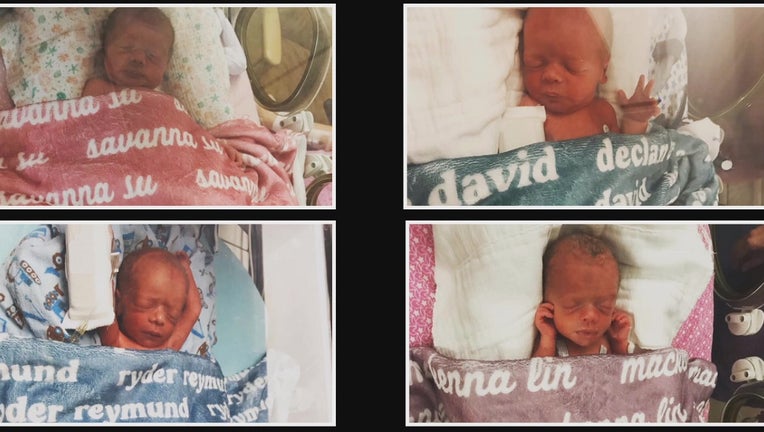 MINNEAPOLIS (FOX 9) - An Elk River, Minnesota family more than doubled in size this week as they welcomed a remarkable delivery of quadruplets.

The two boys and two girls were successfully delivered by C-section on Tuesday morning just before 10 a.m. Weeks earlier, the news of the quadruplets was a welcomed surprise for mom and dad.

An Elk River, Minnesota family more than doubled in size this week as they welcomed a remarkable delivery of quadruplets.

Chelsey had some health issues but desperately wanted a bigger family and used fertility treatments to get pregnant again. Of course, that led to the biggest surprise of their lives: Chelsey was carrying quads.

This week, the joint medical team at Children’s Minnesota and Allina’s Mother Baby Center delivered the incredible four at 32 weeks, each weighing in between, 2 pounds, 7 ounces up to 3 pounds, 9 ounces.

"I actually, before we got on this call, got to hold the first one for the first time, said Reise. "Compared to my daughter, they are not even half the size of what my daughter was. They essentially weigh nothing and it's extremely bizarre when they put them in your arms and you can't even tell they're there."

"They're all fraternal, so they are all going to have their own looks," added Chelsey. "However, we know some fraternal twins that look identical. So far, if you laid them out next to each other, I could tell them apart."

"I could not," joked Riese.

Mom is still working on some post-delivery blood pressure issues, so we’re sending positive thoughts to the entire family. It's not clear how long the kiddos will need to stay at the hospital but they’re breathing on their own. Up next, they will need to start eating on their own. The parents wondered if they might need the remain all the way through that 40-week period, meaning a couple more months.