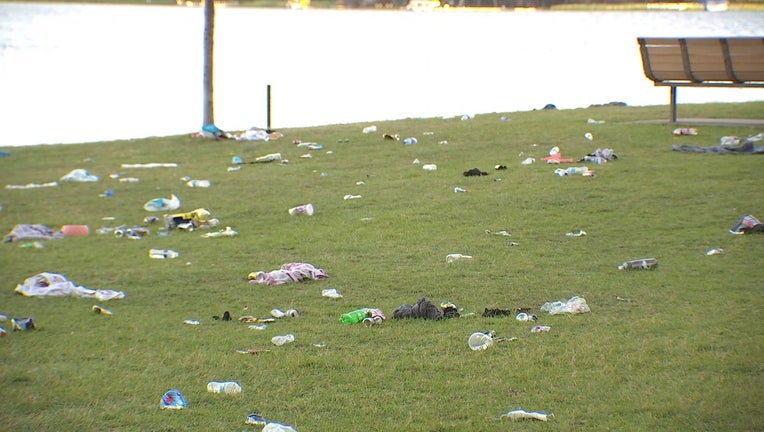 A large amount of trash was left behind after deputies made the crowd disperse at Lake George Beach in Oak Grove.

OAK GROVE, Minn. (FOX 9) - Law enforcement used tear gas to break up a large crowd of teenagers at a beach in Oak Grove, Minnesota after receiving reports of fights, according to Commander Wayne Heath with the Anoka County Sheriff's Office.

Friday just before 6 p.m., deputies responded to reports of an unruly crowd of about 300 teenagers at Lake George Beach. They learned that fights had broken out among the crowd, which was spread throughout different locations in the park. When deputies arrived, they found about 200 people at the beach area.

At one point, authorities received a report that person in the crowd had a gun and that some people had started to climb onto the roof of the park's bathroom building. Officials closed the park and used a PA system to ask people to leave, but many stayed.

Deputies deployed a smoke canister, but later used CS gas, or tear gas, to break up the crowd.

"Some of our deputies deployed a smoke canister, which did get many of the people to leave, but there were people who stayed and were defiant and saying they're not leaving that they own this park," said Heath. "Deputies continued to give orders for people to leave and ultimately did deploy CS gas."

A large amount of trash was left behind in the park.

No arrests were made. One person was treated with minor injuries at the scene. About seven other agencies responded to assist with the incident.

The park will remain closed for the rest of the weekend. The park was closed earlier in the week due similar issues.