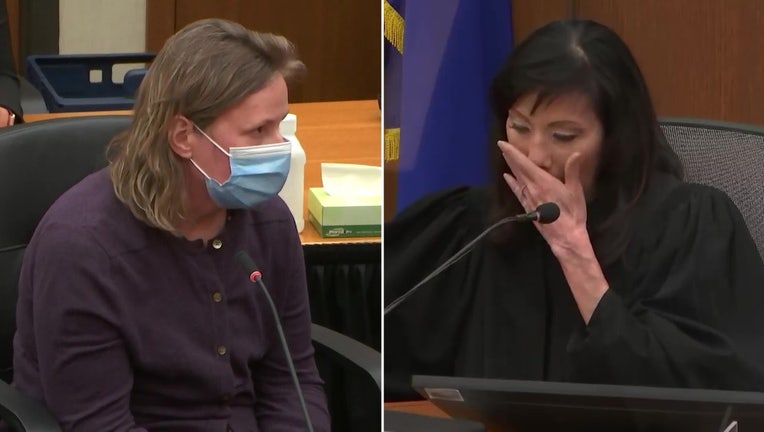 MINNEAPOLIS (AP) - The judge who sentenced white former Officer Kim Potter on Friday to two years in prison for killing Black motorist Daunte Wright cited the difficult job that police face — and Potter’s remorse — as justification for giving her a light sentence.

Hennepin County District Judge Regina Chu choked up as she described the difficulty deciding on a sentence for Potter, who said she meant to use her Taser but mistakenly fired her handgun into Wright’s chest as he tried to drive away from a traffic stop in April.

Wright’s family and attorneys angrily condemned Chu, who is Asian American, for going well below prosecutors’ recommendations. They pointed out that a Black former officer convicted of shooting a white woman in 2017 in a different Minnesota case got no such mercy despite his expressions of remorse.

Katie Wright, who is white, told reporters that Potter "murdered my son," and that, with this sentence, "the justice system murdered him all over again." She accused Chu of being taken in by a performance she alleged was coached, and wondered why her own tears didn’t get such a sympathetic response.

"This is the problem with our justice system today," Wright said. "White women tears trump — trump — justice. And I thought my white woman tears would be good enough because they’re true and genuine."

She joined a small group of protesters later Friday evening chanting and shouting outside a downtown building they believed included Chu’s home.

Katie Wright, the mother of Daunte Wright, joined supporters outside of what they said is Judge Regina Chu’s home Friday night. The crowd gathered several hours after former Brooklyn Center officer Kim Potter was sentenced to two years, a downward departure from the state's sentencing guidelines.

The phrase "white woman tears" has gained currency amid the national reckoning on race, suggesting that white people weaponize their emotions against people of color to protect their privileged positions.

Potter cried in testimony at her trial in December and sobbed again Friday as she directly addressed Wright’s family in the courtroom.

"Katie, I understand a mother’s love and I am sorry I broke your heart," Potter said. "My heart is broken for all of you."

Wright’s family had called for the maximum possible sentence. The state attorney general’s office originally laid out a case for a stiffer-than-normal sentence, then argued Friday for the presumptive sentence of just over seven years recommended by state guidelines.

But Chu said Potter’s conduct over an otherwise exemplary 26-year career "cries out" for a shorter sentence.

Chu has been a judge since her 2002 appointment by then-Gov. Jesse Ventura and previously worked in private practice and the attorney general’s office. Before Potter’s trial, she was the target of a protest by a Minneapolis man who entered a condominium building he thought was hers, then filmed himself making comments meant to pressure her into allowing broadcast coverage of the trial.

Chu took time at Potter’s sentencing to explain her thinking. She said there are four reasons to send someone to prison: "retribution, incapacitation, deterrence and rehabilitation." But she said Potter doesn’t need to be prevented or deterred from committing future crimes and does not require rehabilitation to become law-abiding. Only retribution to pay for the harm she caused applies, she said.

"In this case, a young man was killed because Officer Potter was reckless," she said. "There rightfully should be some accountability."

Chu said "the evidence is undisputed" that Potter didn’t intend to use her firearm, and that made this case less serious than other recent killings by police officers. The judge said Potter’s case is "distinguishable" from the murder conviction of Derek Chauvin last year for killing George Floyd, which led to a 22 1/2 year sentence, or Mohamed Noor’s manslaughter conviction for killing Justine Ruszczyk Damond, which resulted in a five-year sentence.

And Potter’s need to make a split-second decision amid a "chaotic, tense and rapidly evolving" situation constitutes a compelling mitigating circumstance, the judge said.

"To those who disagree and feel a longer prison sentence is appropriate, as difficult as it may be, please try to empathize with Ms. Potter’s situation. As President Barack Obama once said, learning to stand in somebody else’s shoes, to see through their eyes, that’s how peace begins," the judge said.

"Officer Kimberly Potter was trying to do the right thing," Chu continued. "Of all the jobs in public service, police officers have the most difficult one. They must make snap decisions under tense, evolving and ever-changing circumstances. They risk their lives every single day in public service. Officer Potter made a mistake that ended tragically. She never intended to hurt anyone."

On its face, it does not look good that a white woman got a break while Wright’s family and a Black officer — Noor — did not, said John Baker, a criminal justice studies professor at St. Cloud State University. Chu seemed more concerned about Potter than Wright and his family, he said, agreeing that Chu seemed to only pay lip service to the Wright family’s expressions of pain.

Baker didn’t know if Chu was trying to appease all sides on an extremely polarized issue, but said: "When you try to appease both sides, you appease nobody."