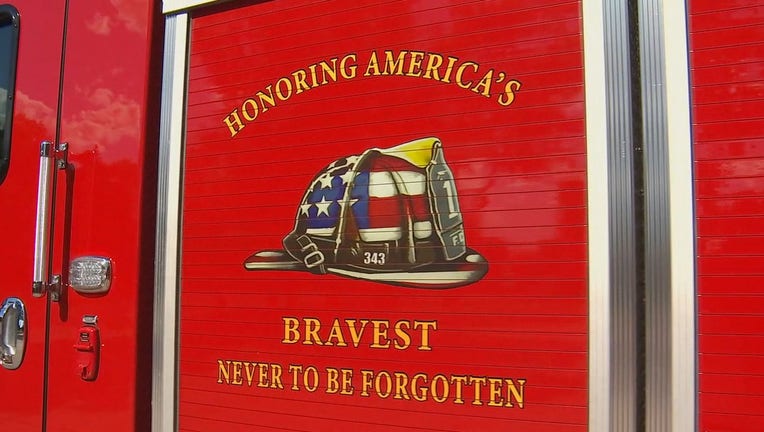 The Coon Rapids fire trucks have a symbol on them to honor firefighters lost in New York City during 9/11. (FOX 9)

COON RAPIDS, Minn. (FOX 9) - As the 20th anniversary of the 9/11 terrorist attacks nears, Coon Rapids is preparing an event to memorialize the lives lost.

"This tool was recovered from the pile of the Twin Towers that collapsed on 9/11 of ’01," said Chief John Piper of the Coon Rapids Fire Department.

As the 20th anniversary of the 9/11 terrorist attacks nears, Coon Rapids is preparing an event to memorialize the lives lost.

The firefighter's Halligan tool held in Chief John Piper’s hands belonged the crew of New York City’s Rescue 5. Like the rest of New York City Fire Department, they raced to the World Trade Center during the terrorist attacks. All but one member of Rescue 5 perished. Their engraved Halligan tool is all that remains.

"I mean, on that particular day," said Chief Piper. "343 of our brother and sister firefighters died and they will never forget."

Neither does Coon Rapids. The numbers 343 are memorialized on the city’s fire trucks.

"My memories of him are fond," said Peña. "The staff shirts that we have on the back of it. It says ‘Be The One.’ Right? And, and what that means is get connected, be there for somebody, be a support system. And that's Uncle Joe. He optimizes that."

He’s one of the unnumbered heroes who saved countless, only to be counted among the lost.

"He actually made it out of the towers," said Peña. "But when everybody ran away, he ran back in and he helped some people. And so, he was the one for somebody, you know?"

That’s why on Saturday afternoon at 2 p.m. Principal Peña is inviting the community to the Cardinals Football Stadium to reflect and remember.

While Coon Rapids may be separated from New York City by 1,200 miles, the cities are firmly connected by steel.

"Right behind me," said Chief Piper. "That's an actual piece of steel that came from the towers. And we dedicated that 10 years ago at the 10-year anniversary. So as the towers show right there, never forget 9/11 of ‘01."

FOX 9’s Tim Blotz will host the commemoration ceremonies in Coon Rapids, which will start with a flyover. Fireworks will follow at 2:40 p.m.