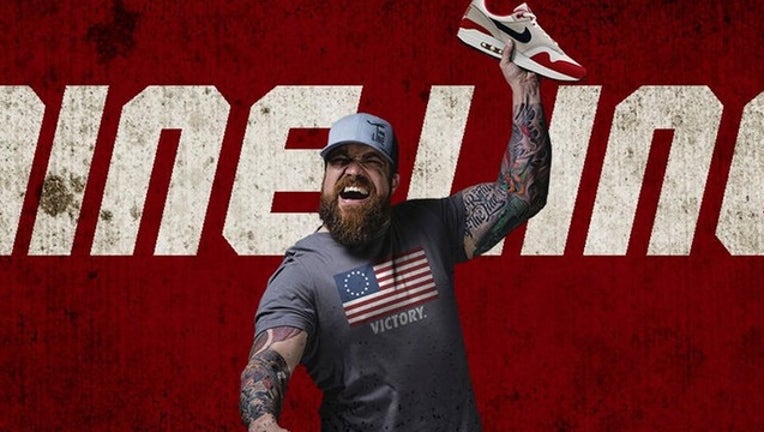 SAVANNAH, Ga. (FOX 35 ORLANDO) - A clothing company is selling shirts inspired by the Betsy Ross shoes that Nike recalled after Colin Kaepernick said they were offensive.

Nike recalled their Betsy Ross Flag Air Max 1 USA sneakers after former NFL quarterback Colin Kaepernick said that the shoes were offensive, as the flag recalls an era when black people were enslaved. Kaepernick also said that the flag has been appropriated by white nationalist groups.

Nike said in a statement that they "made the decision to halt distribution of the Air Max 1 Quick Strike Fourth of July based on concerns that it could unintentionally offend and detract from the nation's patriotic holiday."

Some people are not happy about Nike's decision to recall shoe though. This includes Nine Line Apparel, a Georgia-based clothing line founded by two Army Captains and brothers. They released a video on Tuesday titled the "Betsy Ross Flag is apparently racist."

In the video a man is speaking while wearing a shirt with the Betsy Ross Flag and the word 'victory' below it. The first thing he says is "Let's take a minute to talk about the child that is Colin Kaepernick, once again forcing himself back in the media because he deems something offensive or racist again."

The video goes to discuss the history of Nike and Nine Line Apparel supports freedom of expression. They are selling several of the Betsy Ross Flag shirts and hoodies on their website. These are only available until July 6th.

The clothing company told Fox 35 that "Nike leaves behind anti-American sentiment and division that harms our country. But since Nike has no interest in displaying the Betsy Ross flag, a classic symbol of freedom and unity, we proudly will. We don’t do recalls on patriotism."

Since pulling the shoe, several leaked pairs have sold for more than $2,000.

Arizona Governor Doug Ducey expressed his disappointment in Nike for the recall. He is pulling incentives for the new Nike plant that was set to open in Goodyear, Arizona.

California Governor is praising Nike, though. He said that his state was "open for business" following the controversy.

Nike currently employs 35,000 people in the United States and is committed to creating more jobs.