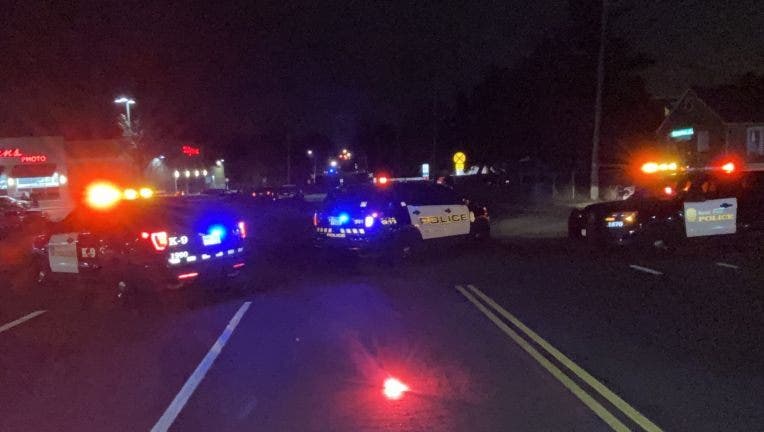 A man was found shot in the face inside a car on Larpenteur Avenue East in St. Paul, Minnesota Monday night. (St. Paul Police Department / FOX 9)

ST. PAUL, Minn. (FOX 9) - A St. Paul, Minnesota man has been charged with murder for allegedly assaulting his girlfriend before shooting and killing her friend Monday night.

Glenn Lee Burton, 40, of St. Paul is charged with second-degree murder and second-degree attempted murder in the shooting death of 56-year-old Todd Gerleman.

According to the criminal complaint, officers responded to the Acro gas station on the 300 block of Larpenteur Avenue East around 6:50 p.m. on a report a man had been shot. Upon arrival, they located the victim, later identified as Gerleman, inside a Ford Focus. He had been shot in the face.

Gerleman did not have a pulse. Medics arrived and declared him dead at the scene.

Officers learned the shooting had taken place on the 100 block of Larpenteur Avenue West, outside the home of Burton’s mother.

Officers spoke to a woman at the gas station who was crying hysterically and had what appeared to be blood on her hands. She identified Burton as the man who had shot Gerleman and said he had assaulted.

The woman told officers she had been dating Burton for the past two weeks, but he had recently become possessive and physically abusive.

On Monday night, the woman said she drove to her house with some friends to repair some home damage she said Burton had done. She was driving Gerleman’s car and Gerleman was in the front passenger seat. The rest of her friends were in another car.

When she arrived, she saw Burton’s car and a light on in the spare bedroom. Burton did not have keys to her home. She called him, but the calls went straight to voicemail. She told her friends they should do the repairs another time and then drove to Burton’s mother’s house on the 100 block of Larpenteur Avenue West.

She called Burton’s mother and asked her to get her son to leave her house, otherwise she would call the police. Burton had reportedly broken into her house several times in the past.

As the woman was walking up the driveway to go into Burton’s mother’s house, Burton pulled him. He ran at her, grabbed her and pulled her towards his car. He reportedly pulled her hair and punched her several times.

Burton tried to close the driver’s side door, but Burton’s handgun was in the way. He shot into the car, striking Gerleman in the arm. He then went around to the passenger side and shot Gerleman in the face.

The woman drove off and stopped at the Arco gas station to call 911 because her cell phone was dead.

Officers located Burton at a home in Roseville, where they also found a 9mm handgun that matched the one used in the deadly shooting. He was arrested on Tuesday night.

Burton made his first court appearance on the charges on Thursday afternoon. Gerleman’s death was the 33rd homicide in St. Paul in 2020.