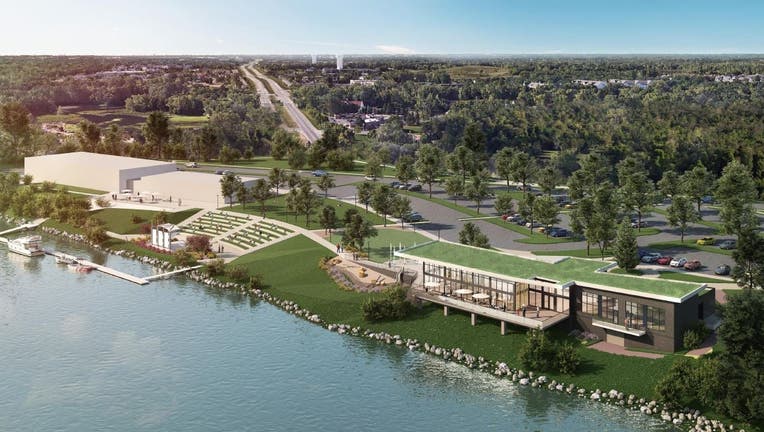 A rendering of the Mississippi Point Park redevelopment project that is underway in Champlin, Minnesota. (City of Champlin)

CHAMPLIN, Minn. (FOX 9) - After 25 years of planning, the City of Champlin is moving forward on a massive project to redevelop a stretch of land along the Mississippi River.

Stacy Brooks and her husband told FOX 9 they absolutely love having the Mississippi River practically in their backyard.

"It’s really gorgeous, just kind of a relaxing spot to be to get some work done," said Stacy Brooks, a Champlin resident.

"We come out every couple of weeks just to use a little bit of relatively quiet space by the river here," said Mike Baynton, a Champlin resident. "It’s on purpose that we’re out here in Champlin and not somewhere closer into the urban core."

The City of Champlin’s $100 million development project will open up river access beyond the current dam and add a few docks and some greenery in Mississippi Point Park.

"So it provides people that may not live on the river the opportunity to get exposed to it and see Champlin from the river side," said Bret Heitkamp, Champlin City administrator.

The first phase is the 200-plus unit Bowline apartment building tucked in between Highway 169 and the river. Residents should begin moving in this winter.

"The park improvements and amenities are going to bring the river right to residents and that’s what the City Council is looking for," said Heitkamp.

While the project has been 20 years in the making for city leaders, some in town are a bit leery, liking Champlin’s little Mississippi River secret.

"I hope that if they are going to develop something more that it doesn’t pull in lots more folks, like it doesn’t necessarily make Champlin a big riverfront destination for folks from a broader area and make this space a lot busier," said Baynton.