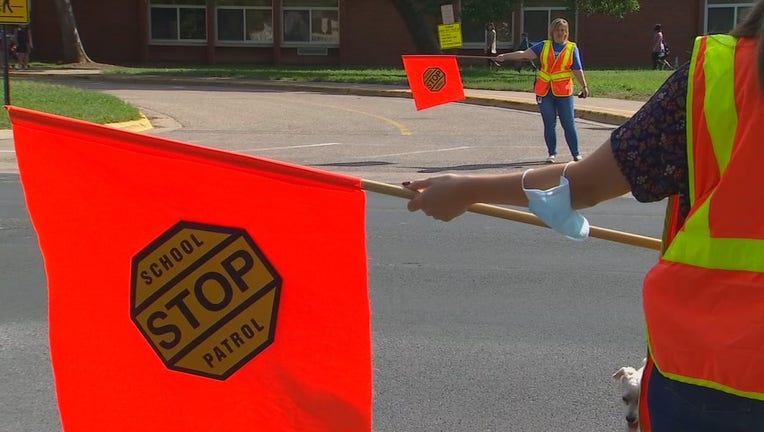 One crash happened on the second day of school Wednesday morning in front of Blaine’s Madison Elementary. There, the crossings are protected both morning and afternoon with colorful crossing guards. A teacher supervising those patrols was hit by a car, injured and hospitalized.

After two school staff members were hit by cars in Blaine, school leaders are urging drivers to take caution during school traffic.

Olsen says that teacher is now home, but this incident drives home a safety message as they’re seeing more kids being driven and fewer taking a bus.

"Just that increased traffic, we’re seeing people going faster," said Olsen. "They’re in a hurry and creates an unsafe situation for our students."

Blaine police say the driver, a parent, said she was distracted while adjusting her child’s face mask. She was cited.

On Thursday morning, a student at nearby Blaine High School also hit a staff member working a crossing, sending them to the hospital. The student was blinded by the sunrise. No citation was issued in that incident.

"Sometimes we know that sunshine could be a cause for a problem, but again I just want everyone to slow down, especially when you’re driving in front of a school," said Olsen. "Just take a little effort to be patient and slow down."

Olsen says they’ve noticed more parents driving kids to school since the pandemic began for a variety of reasons. Other districts across the metro, which are facing well-publicized bus driver shortages, are also seeing increased traffic due to simple necessity. With that increased traffic and school zone congestion comes the increased risk.

"We just need everyone to cooperate and follow those guidelines, please be patient and slow down a little bit for the safety of our children," said Olsen.