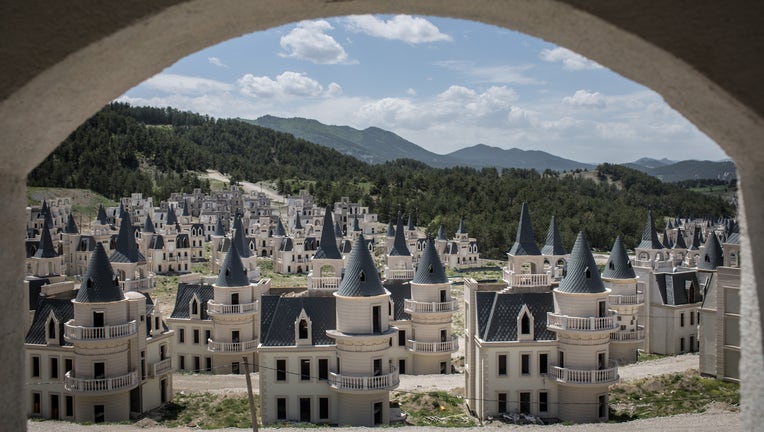 Hundreds of castle-like villas and houses are seen unfinished at the Burj Al Babas housing development on May 21, 2019 in Mudurnu, Turkey. (Photo by Chris McGrath/Getty Images)

It was supposed to be a luxurious enclave for the ultra-wealthy — a community of mini-castles by the sea.

Now, some eight years after construction began, the half-castles of Burj Al Babas sit eerily empty, abandoned in what could be the most opulent ghost town on Earth.

Located in northwest Turkey near the Black Sea, Burj Al Babas was designed for rich Arabs who visit the region for the Mediterranean climate, according to The New York Times. The chateaus were inspired by landmark buildings in Istanbul and a mix of American and British architecture. The result: rows and rows of lavish-looking miniature castles plucked straight from a storybook.

Construction began in 2014, with plans for 732 castles, a shopping and entertainment center, and Turkish baths from natural hot springs, Atlas Obscura reports. The palatial estates would sell for between $370,000 and $500,000.

A photo shows hundreds of houses part of the Sarot Group's Burj Al Babas project on December 15, 2018 close to the town centre of Mudurnu in the Bolu northwestern region.         (Photo credit ADEM ALTAN/AFP via Getty Images)

But the Sarot Group, the project developer, went bankrupt, thanks to a combination of bad luck, bad choices and bad timing with the Turkish economy. By the time the project was abandoned in 2019, about 583 castles had been built (or partially built).

Developers said in 2019 they hope to revive the project, but that was pre-pandemic and the future of Burj Al Babas remains unclear. Reports say the only residents now are stray cats and dogs.

The development is near Mudurnu, a town known for its 600-year-old mosque and traditional Ottoman houses. Residents of the historic village have protested the project from the get-go and continue to oppose the "white elephant" to this day.