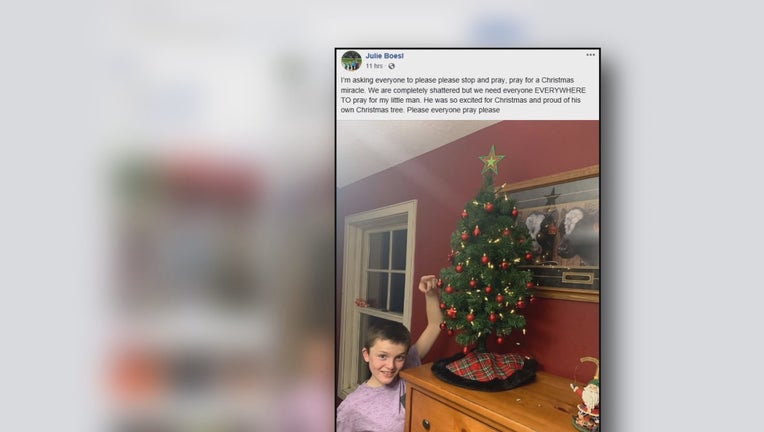 MILLERVILLE, Minn. (FOX 9) - The family of a boy who was seriously injured in a deadly incident on a farm in western Minnesota, that took the life of his father and uncle, says he has passed away, according to a post on CaringBridge.

This past weekend, 11-year-old Alex Boesl was working with his father, Curt, on a silo at their farm on Gravel Pit Road, just outside of Millerville, when the two became overcome by fumes from the silo.

The community mourns the loss of 2 volunteer firefighters after a farming accident in Millerville, Minnesota.

Deputies said Alex's brother witnessed the incident and quickly called 911 along with his uncle Steve, who lived nearby, for help. Steve got to the scene shortly after and attempted to save his brother and nephew but also soon passed out from the fumes.

When first responders got to the scene, Steve Boesl was pronounced dead. Curt was flown to St. Cloud Hospital where he also died.

Alex was also taken by helicopter to a hospital in the Twin Cities where he passed on Thursday. In a CaringBridge post, a spokesperson for the family wrote: "Although a miracle didn’t happen here for us, eternal life in the House of God is the most beautiful of all miracles. Pray for Alex’s family, as we prepare to say goodbye to our sweet boy. Through our faith, we have no doubt that Alex will be united with his dad in Heaven, as Curt waits for him with arms wide open."

A family spokesperson tells FOX 9 they plan to donate Alex's heart. In the post, they write: "As others wait for a miracle, Alex’s heart of gold would want them to receive it. Alex’s Christmas miracle is giving life to others. His giving legacy will live on."

Earlier this week, we learned that both Curt and Steve served with the fire department and were well-respected members of the Millerville community.

As of Thursday night, a GoFundMe campaign has raised $44,000 to help support the families.