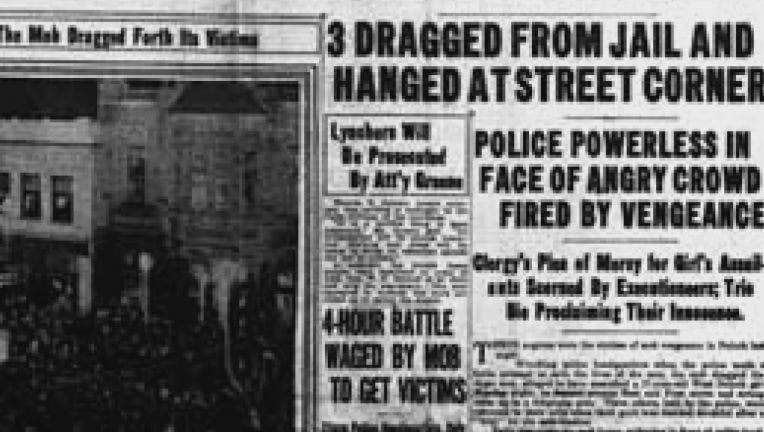 Max Mason was convicted in the alleged rape that sparked the Duluth lynchings in 1920. (FOX 9)

ST. PAUL, Minn. (FOX 9) - The Minnesota Board of Pardons will be considering a posthumous pardon for a man who was convicted in a 1920 rape, which sparked the Duluth lynchings.

Max Mason was one of six black circus workers arrested for the alleged rape of a white woman in Duluth. A mob stormed the jail, dragged three of the men from their jail cell and lynched them in the streets in front of a crowd of 10,000 people. Elmer Jackson, Isaac McGhie and Elias Clayton were killed in the incident. No one was ever convicted for those killings.

Mason was tried and convicted for the alleged rape and was sentenced to 30 years in jail, but was granted parole in 1925. Mason moved to Alabama where he raised a family and died at age 46, according to Attorney General Keith Ellison. In series of tweets Thursday night, Ellison said the board is "poised to do justice" 100 years later.

"Justice delayed is justice denied," Ellison tweeted. "But 100 years later, justice can still be done. The last weeks in MN have shown us we have a need for a better quality of justice. A pardon for Max Mason is another long-delayed step toward it."

Ellison and Governor Walz are among the three people who make up the three-person pardon board. In December, the board voted unanimously to reconsider Mason's 1924 pardon denial. At the time of the vote uncertainty still remained if the board had the legal authority to grant a posthumous pardon, but the board planned to consult legal counsel. If the pardon is approved, this will mark Minnesota's first posthumous pardon.

The board will meet at 9 a.m. Friday.